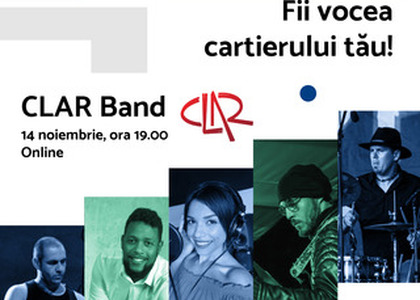 Your neighbourhood, our scene!

The project is developed by Asociația Trib'Art (Tribul Artistic) and it benefits from a sponsorship of 14.950 euros, through the Active Citizens Fund Romaniaprogramme, founded in Iceland, Liechtenstein and Norway, through the SEE Grants 2014-2021. The contents of this address do not necessarily represent the official position of the SEE and Norwegian Grants 2014-2021; for more informations, access www.eeagrants.org.

The series of The scene in the neighborhood events - a project of local intervention dedicated from the independent district of Timișoara - debutes this weekend with a first concert. The concert held by CLAR Band on the 14th of November, 7 PM, can be watched on the Facebook page of the project and on the webpages of its partners, such as: Radio Romania Musical, Radio Timișoara, Best of Timișoara and others.

Additionally, the 30 local musicians, selected as a result of anappeal, attend the meetings, online, during which subjects of interest for the independent local musical district are discussed, the sessions being coordinated by an expert inpublic policies. The appeal has been addressed to all the artists whose activity was gravely affected by the pandemic and who fulfill one of the three conditions: they are not employed, they have not received an entitlement or social welfare lately and/or have not had any contractual arrangements lately.

"This very project is addressed to the independent musicians in our region and it deals with valorizing them in a period in which there are severe restrictions. A lot of them are dependent on the money which they could make out of musical projects, a great deal of which has been postponed or cancelled. Facing a sombre perspective, that of the indefinible, no one knows when this period comes to an end. This is why, projects like this, which are not numerous and which are brave, offer means of expression and not only financial advantages to the musicians - because each artist will receive a fee in accordance to a contract - but also the possibility of keeping in touch with an audience, albeit a virtual one. Musicians are sensitive beings, very delicate ones, and even a small or immaterial, virtual, audience is essential to them. Another aspect of this project, which I consider to be important, is that of the musicians who, usually, do not play together. Overall, with some exceptions, it is about the musicians who know each other, but not on the stage, they have not evolved together, and who, in this very moment, are determined to prepare projects. The scene in the neighborhood wishes to be an example of good practice, one that can be assumed and duplicated by other entities, be it NGOs or institutions, no matter the city.", Johnny Bota, the Art Director of the project, declared.

Even though the interventions have inititally been thought to be offline events with audience participation, due to the new restrictions created by the COVID-19 pandemic, they are broadcast online, through live stream. The concerts take place in the districts of Timișoara, in spaces which can be easily transformed intostages for classical music, blues, fusion or jazz concerts. Beyond the stages and the concerts, the message is simple: music finds its place in every urban space.

Vote the scene in your neighbourhood! is one of the inducements launched for the local communities who, although do not physically take part in the concerts, can vote their neighbourhood to become a scenefor the night. This way, music lovers can access the website of the project, and by filling in a form, they can choose the scene-neighbourhood for the next concert in the project. The series of events will last for 7 weeks and will end on the 19th of December.

The people from Timișoara cand vote the scene in their neighbourhood on:www.scenadincartier.ro

CLAR BAND in online concert on the 14th of November

The first concert is held by CLAR BAND, a band which was created in 2013 in Timișoara, in the concert hall of the Fundația Județeană pentru Tineret Timiș (Cartier Stadion). The audience which will watch the concert on the Scena din cartier webpage will enjoy a relaxing night shrouded in tunes of blues. On the scene, we are going to see: Claudia Negruț (vocals), Sandro Machado (vocals), Loris Negruț (guitar), Zsolt Szamtarto (bass) and Bebe Borozan (drums).


Translated by Handrea Alexandra,
University of Bucharest, Faculty of Foreign Languages and Literatures, MTTLC, year I
Corrected by Silvia Petrescu
Return to Events