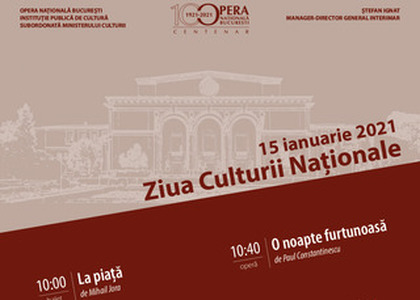 This year, the Bucharest National Opera celebrates 100 years since its institutionalization. Were opening the series of events dedicated to the Centenary on the occasion of the celebration on January 15th, 2021, of the National Culture Day. The first lyrical scene of the country will be broadcasted online, in a cultural marathon that will take place throughout the day, six performances by Romanian composers within the project entitled #DordeONB from the Opera online series.

In the 100 years of fulfilling activity, the Bucharest National Opera has become a fundamental component of culture and musical life and gives the measure of a general level of art reception, all the more so as the late twentieth and early twenty-first century facilitate public access not only to the show itself, but also to the sound recordings and online broadcasts of the great lyrical events.

To reconsider the importance of the role of national culture, the six famous works will be broadcast online on the institution's website, in the link https://operanb.ro/operaonline/ and on the Youtube channel of the Bucharest National Opera, in the https link : https://www.youtube.com/OperaNationalaBucurestiONB.

The program of the shows includes:

"La Pia"
by Mihail Jora, ballet show that will open the series of events, the recording can be viewed starting with 10:00 am. Mihail Jora's choreographies can be considered true stages of the development of Romanian choreographic art. In the music of his five shows, there are various accents, from the satirical ones, to the lyrical ones, from the picturesque verve, to the perfume of the past times. Presented for the first time in the world on the stage of the Bucharest National Opera, on March 17th, 1932, "La pia" opened the series of Jora's ballets, evoking the motley world of the old Bucharest slum. The composer approached a theme of popular inspiration, with forays into fiddle music, according to his caricatured intentions with a critical substratum, in the spirit of Caragiale.

The ballet show "Rosu si negru" by Livia Teodorescu Ciocnea will continue the cultural marathon and will be broadcast starting with 11:30 am. "The show seeks a reconciliation between modern and classical, in order to restore communication between contemporary art and the public. The message of the work is beyond the historical moment invoked and is part of the great themes of meditation on the human condition: faith, love, duty." - Livia Teodorescu Ciocnea

"Motanul nclat" by Cornel Trilescu will represent the invitation addressed to the children on the occasion of the National Culture Day, the recording of the show being available starting with 1:40 pm. The story of the naughty cat who uses countless tricks to gain power, wealth and the hand of a princess for his master, has conquered over time not only theater and film directors, but also composers who, starting from Perrault's fairy tale, they wrote remarkable works of opera.

The show "O scrisoare pierduta" - opera in two acts and a prologue by Dan Dediu will complete the series of online broadcasts starting with 3:20 pm. A mirror of the Romanian society, Caragiale's play remained a topical subject, admirably constructed, in a style of a special originality. The opera performance is often influenced by literary-dramatic creations, taking from them themes, characters, even the complete action. For the creators of the contemporary opera "O scrisoare pierduta", the text of the well-known playwright Ion Luca Caragiale was, of course, a challenge.

The "Romnete"concert will end the series of events dedicated to the National Culture Day and will be broadcast starting with 6:10 pm. Characterized by uniqueness and originality, the concert brings together in a show composed of an exclusive Romanian repertoire famous soloists of the first lyrical scene of the country, accompanied by the Bucharest National Opera Orchestra.

The 15th of January, declared as the Day of National Culture since 2010, is the birthday of the national poet Mihai Eminescu (1850-1889). Over time, the National Culture Day was not only the day when Romanians celebrate a great creator, but also a day of reflection on Romanian culture, in general, and cultural projects of national interest.