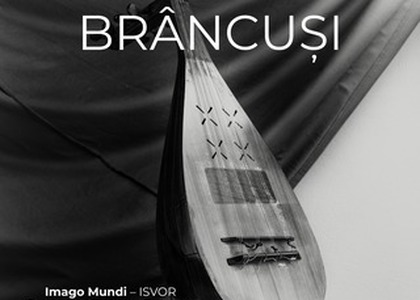 On February 19th, we celebrate the 145th anniversary of one of the mightiest, charismatic, and endowed with genius Romanian artists - Constantin Brancusi.

On Brancusi Day, the Casa Radio Publishing House brings to public's attention a collector's album: "Imago Mundi - Isvor. Cantemir, Enescu, Brancusi" - a 3-CD box, each dedicated to a personality who had marked the national and universal culture in different epochs.

The third CD of the trilogy - "Isvor - Constantin Brâncuși" - inspired by the life and work of the great Romanian sculptor, is a sonic reconstruction of Brancusi's world: from the time spent in Gorj county, where he was born, and formed spiritually, to that in Paris, which led to his artistic and cultural accomplishment. The works that constitute the musical programme, composed by Cătălin Ștefănescu-Pătrașcu, take their inspiration from Oltenia traditional music, the music of Maria Tănase (maybe the most influential singer of the Romanian traditional music, but also one of Brâncuși's greatest loves), the music of Erik Satie (the celebrated French composer, the forerunner of minimalism, surrealism, repetitive music or "théâtre de l'absurde", interested in the Romanian fiddlers' music, and a good friend with the Romanian sculptor), or just from the works of Constantin Brâncuși: Sleeping Muse, Bird in Space, Wisdom of Earth, The Table of Silence, and The Column of Infinity.

With this album, the Imago Mundi Ensemble proposes a reconsideration of the Romanian traditional music from the contemporary composition perspective - a creative process that includes not only the recovery of a repertoire, but also personal composition, fiddlers' music, and cultivated sound. There are three distinct worlds comprised in the Isvor: Cantemir, Enescu, Brâncuşi trilogy. Once reinterpreted, analysed, and recomposed, they become a part of a sole identity - Imago Mundi. Having a rich experience gained since its founding in 2001, enthusiastically received in Vienne, Graz, Istanbul, Estoril, Berlin, Brussels, Riga, London, New York, Salzburg, Belgrade, Budapest, Bratislava, Tunis, or Granada, as well as in more than 30 Romanian cities, the Imago Mundi Ensemble is composed of six artists: Oana Ivașcu (oboe), founder and manager, graduate of the National University of Music Bucharest (NUMB), musician with a great openness to innovation; Daniel Ivașcu (percussion), founder, graduate of Bucharest National University of Arts, visual artist by education, and percussionist out of passion; Cătălin Ștefănescu-Pătrașcu (composition, cobza, guitar), PhD in Music, double degree in Instrumental Music and Composition, Associate Professor at the guitar department of NUMB; Adrian Buciu (flutes), PhD in Music, double degree in Instrumental Interpretation and Conducting, Vice Dean of the Faculty of Musical Interpretation of NUMB; Ștefan Barbu (violin), violinist of the Radio Chamber Orchestra, with specialty in old music; Andreea Țimiraș (cello), PhD in Music, Professor of Chamber Music at the "DinuLipatti" National College of Art, and Associate Professor at NUMB, with specialty in old and contemporary music.

The album details on: www.edituracasaradio.ro

The album can be purchased at the manufacturer's price, by ordering it online from the Casa Radio Publishing House official website: www.edituracasaradio.ro It can also be purchased from the distribution partners.