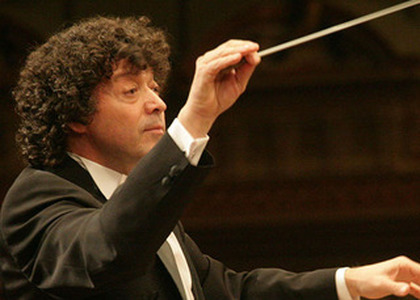 Mendelssohn and Mozart, in the program of the online season of FGE

On Friday, April 2nd, 2021, the "George Enescu" Philharmonic broadcasts, from 19.00, a live concert, without audience, conducted by Adrian Petrescu, having as soloist Rafael Butaru, who will perform, together with the Philharmonic Orchestra, Concerto in E minor for violin and orchestra, op. 64 by Felix Mendelssohn. The program of the evening, which will be broadcast on online channels, also includes the Overture to the opera Ruslan and Ludmila by Mihail Glinka and Symphony no. 25, in G minor, KV 183 by Wolfgang Amadeus Mozart.

Felix Mendelssohn (1809-1847), a prominent representative of Romanticism, greatly influenced German musical life for two decades. For the violin, the composer created several works, of which the best known by performers and the public is the Concerto in E minor, with no. 64. "Written in 1844, he had his first audition on March 13, 1845, in Leipzig. There are subtle thematic relations between the parties in this concert; , but before it. Lyrical and bright, this concert is the embodiment of Mendelssohn's own nature ", appreciates the musicologist Petre Codreanu.

Mihail Glinka - The overture of the opera Ruslan and Ludmila

The concert can be listened to on the online channels of the "George Enescu" Philharmonic:

The media partner of the event is Radio România Muzical.

A musician with an impressive national and international artistic career, Adrian Petrescu is the first oboist of the "George Enescu" Philharmonic in Bucharest. He founded and directed the Romanian Brass Chamber Brass Band and, since 2019, he has been a guest teacher at the Chamber Music Department, "Brass Ensemble Ensemble" section, within the National University of Music in Bucharest.

Born in Brasov, he started studying the piano at the age of 6, then the oboe at the age of 10. After completing his studies and musical specializations with renowned teachers such as Anselm Honigberger and Radu Chişu, Adrian Petrescu was the winner of prestigious international competitions, such as the "Prague Spring" and the Marktneukirchen International Competition. Since 1990 he has been the first oboist of the George Enescu Philharmonic in Bucharest. He has performed in the country and abroad with great conductors and soloists and has been invited as a soloist at numerous national and international festivals. He has also performed in chamber ensembles such as the Trio Syrinx, the Baroque Trio and the George Enescu Philharmonic Wind Quintet. In 2005, Adrian Petrescu founded and conducted the first Romanian Brass brass chamber ensemble, and in 2008 he debuted on the conducting podium in front of a symphony orchestra. Concerts followed as conductor of the most important orchestras in the country, such as the George Enescu Bucharest Philharmonic, the Transylvania Philharmonic in Cluj, the Moldova Philharmonic in Iasi, where he was appointed permanent guest conductor in 2013 and at the symphony orchestras in Tg-Mures , Bacău, Timişoara, Sibiu, Satu Mare, Braşov, Constanţa etc. Adrian Petrescu was present on the stage of the George Enescu Festival, as a soloist with the Banatul Timişoara Philharmonic and in a recital with the pianist Mihai Ungureanu. As a conductor he participated together with the Romanian Brass ensemble, having as soloists the trumpeter Sergey Nakariakov and the pianist Michael Roll, in 2017 he conducted the Iaşi Philharmonic in the concert "Music of the 20th century", and in the 2021 edition also with The Iaşi Philharmonic will have as soloists the violinist Patricia Kopatchinskaja and the pianist Cristian Niculescu. Adrian Petrescu made a series of recordings on CD and DVD both as a soloist and as a conductor of the Romanian Brass band.

The violinist Rafael Butaru, a graduate of the "Gheorghe Dima" Academy in Cluj-Napoca, is currently concertmaster of the George Enescu Philharmonic (since 2019) and of the Bucharest National Opera. Throughout his career, he has performed with prestigious musicians such as Marin Cazacu, Dorin Marc, Liviu Prunaru, Răzvan Popovici, Răzvan Suma and at the SoNoRo festival with Gilles Apap, Reto Bieri, David Cohen, Daishin Kashimoto, Diana Ketler , Bjørg Lewis, Răzvan Popovici, Alexander Sitkowetsky, Daniel Rowland, Serghei Malov, Alina Pogostkina. He has won numerous awards at national and international competitions. He also participated in numerous master classes, including orchestra and violin classes given by Adam Fischer and members of the Vienna Philharmonic Orchestra; early music and instrument training courses by Dieter Weitz, Cristoph Wyneken, international chamber music classes by the Chilingirian and Amadeus Quartets in London, as well as Stefan Metz (member of the Orlando Quartet) and Devich Sandor (Bartok Quartet).

He is named "Friend of the Princess Margaret of Romania Foundation" within the national program "Young Talents", following the invitation as a lecturer and mentor to the masterclass for training young musicians and member of the jury in the selection of scholarship holders from 2015 to now.

Together with the ensemble ArGenTango he successfully held two national tours, which resulted in a CD recorded in concert "Live at Sala Radio", together with Analia Selis, Omar Massa, Mariano Castro and Răzvan Suma.

Rafael Butaru is a member of the Ludens Piano Trio and the early music ensemble "I Ludici", with whom he frequently performs at the SoNoRo, "Magic Summer", "Enescu and World Music" festivals and with whom he gives concerts in Budapest and Madrid in within the great early music festivals with the conductor Gabriel Bebeşelea and the soprano Rodica Vică.