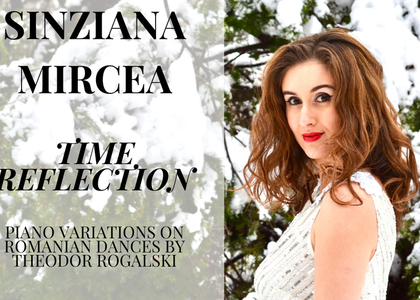 Sînziana Mircea, the world-famous pianist whose record includes tours in countries such as: China, Japan and the United States of America, announces today the launch of the video for the song "Time reflection". This piece is composed and performed on piano by Sînziana Mircea, to mark the 120th anniversary of the birth of the great Romanian composer Theodor Rogalski, being the composer who inspired her in the latest musical creations. Thus, within the "Brătianu Scholarship" offered by the Ministry of Culture, the Romanian pianist composed and performed on the piano a series of variations inspired by the music of the Romanian composer. The first video, entitled "Home", was released in the fall of 2020. The second video, made for the song "Time reflection", is released today at 7 p.m.

Both pieces, "Home" and "Time reflection" represent variations for piano, composed by Sînziana Mircea, starting from themes from the symphonic suite "Three Romanian Dances" by Theodor Rogalski. The "Three Romanian Dances", belonging to the Romanian composer, were performed in 1950, bringing together representative folk themes: Game from Transylvania, Gaida and Hora from Muntenia.

"The music of Theodor Rogalski has always fascinated me by the way it captures the musical essence of the Romanian spirit. So, I wanted to be able to include it in the piano repertoire. Thus, the songs" Home "and" Time reflection "were born, variations inspired by the "Three Romanian Dances", presented this time at the turn of the 21st century. Through the song "Time reflection" I set out to transform Romanian sounds, so as to describe through music the passage of time, being inspired by the lyrics of our great poet and philosopher Lucian Blaga, who said: "I believe that eternity was born in the village./ Here any thought is slower, / and your heart beats less often." The video for the song "Time reflection" shows the passage of time from a season to season, the changes that take place before our eyes when winter turns into spring, when nature revives, always marking a new beginning ", said the pianist and composer Sînziana Mircea, wanting to mark a man act brought to the composer Theodor Rogalski.

Thus, "Time Reflection" completes the series of videos made together with Dan Gherghiceanu, video maker, on the occasion of the release of the album "Fortuna - Piano Sensation" at Electrecord in December 2020. The video "Time reflection" -https: // youtu. be / iYryTVY0QSU - will be available today, from 7 pm, on Sînziana Mircea's You Tube channel, to which we invite you to subscribe to watch future releases.

Some facts about Theodor Rogalski, the Romanian composer who is a source of inspiration for the pianist:

Radio România Muzical mentions: "120 years have passed since April 11, the birth of Theodor Rogalski, conductor and composer who contributed significantly to the development of the Romanian Broadcasting Symphony Orchestra. He was the first conductor of this ensemble, which he conducted between 1930s and 1954 ... "

"A gifted musician and man of character, Theodor Rogalski (1901-1954) belongs to a generation of enthusiastic bourgeois, animated by ideals that had the energy and skill to come true. In his time, he fulfilled with competence, modesty and devotion. , a key cultural role… "begins the biography of the composer of the Three Romanian Dances, which you can read in full at the link .

Born on April 11, 1901 in Bucharest, Theodor Rogalski trained as an artist in three music centers: Bucharest, Leipzig, Paris. He began studying composition with Alfonso Castaldi at the Bucharest Conservatory (1919-1920), conducted the Leipziger Konservatorium for three years (from 1920) and completed his studies at the Schola Cantorum in Paris (1924-1926), in the orchestration class of Maurice Ravel .

Returning to the country, he briefly became a co-star at the Romanian Opera in Bucharest; then he conducted the Broadcasting Society Symphony Orchestra between 1930-1951. He was director of Broadcasting from 1939 to 1944 when he was fired - and repressed a year later - by the new communist administration. However, his art was appreciated since, in the 1950s, Theodor Rogalski conducted the orchestra of the "George Enescu" Philharmonic.

At the beginning of his activity he was more concerned with the piano, but in the following years his passion became the baton of a conductor. The history of Romanian music records several compositions, of which the String Quartet, Two Symphonic Sketches and Three Romanian Dances remained memorable…

"Returning in 1926, Mr. Rogalski became a co-curator at the Romanian Opera. He composed several pieces, the most interesting of which is Dances for blowers, drums and piano […]. With these Dances Mr. Rogalski found his whole personal expression which - very rare thing - he goes to homoristic and caricature.Paparudele and Burial at the Parsley, here are the names of the two dances that carried abroad the name of the young composer.Thanks to them, he was successful in Paris, Italy and Poland.More details about the Romanian composer of Polish origin, Theodor Rogalski, you can find at the link: https://ro.wikipedia.org/wiki/Theodor_Rogalski

Sînziana is the winner of the Van Cliburn Foundation & TCU Scholarship Award (2014), as well as the winner of the Miami International Piano Academy (2016). Sînziana received the title of Young Steinway Artist in 2017, designating the most promising pianists in the world.

The recordings of his live concerts were broadcast by all major European radio channels for classical music, including BBC Radio 3, RAI 3 Italy, Music3 Belgium, Radio România Muzical and others (Sweden, Norway, Poland).

On September 20th, 2020, Sînziana Mircea's recital was the headline for the edition of the show "Through the night" produced by BBC Radio 3, broadcast in 13 European countries, with an audience of one million listeners.

In 2020, Sînziana had the necessary time and inspiration to compose a series of works based on famous composers of the 20th century, pieces that are included on the album released at Electrecord, at the beginning of December.