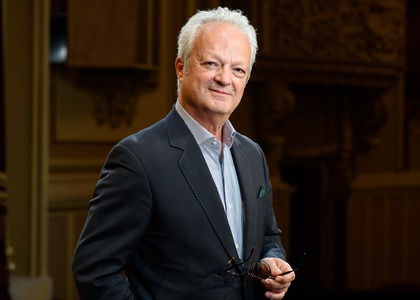 When he was only 17 years old, in 1930, the young piano man, conductor and composer CONSTANTIN SILVESTRI was leading for the first time the newly founded Radio Orchestra, conducting his own work: Preludiu și fugă (Toccata). Five years later, Silvestri received the Composition Prize "George Enescu" and became the music director of the Opera from Bucharest. His extraordinary career encompasses, also, the Romanian premiere of the Enescu's Opera "Oedip", which was conducted by Slvestri. At the end of the 50's, he emigrated to Great Britain where he continued to have, until his sudden death, a beautiful international career.

The work "Trei piese pentru orchestră de coarde" by Constantin Silvestri will open the concert of the Radio Chamber Orchestra, presented LIVE, at the Radio Hall, on Wednesday , 7th of April (at 7 o'clock p.m.). The event will be conducted by the well appreciated conductor of the National Opera of Bucharest, VLAD CONTA.

The evening will continue with HAYDN-Concert nr. 1 for viollin and for orchestra, performed by Gabriel Croitoru on the famous violin "Catedrala" that belonged to George Enescu (an instrument that is in the administration of the National Museum "George Enescu"). The event will end with the Simphony no.40, which was composed by MOZARD.

The concert will be LIVE over the radio waves- on all the frequencies of Radio Romania Cultural and Radio Romania Musical- in streaming live on the Internet, on sites like www.radioromaniacultural.ro and www.romania-muzical.ro and on the FACEBOOK pages Orchestrele, Corurile Radio and Radio România Muzical.


Translated by Mihai Petre,
University of Bucharest, Faculty of Foreign Languages and Literatures, MTTLC, year I
Corrected by Silvia Petrescu
Return to Events