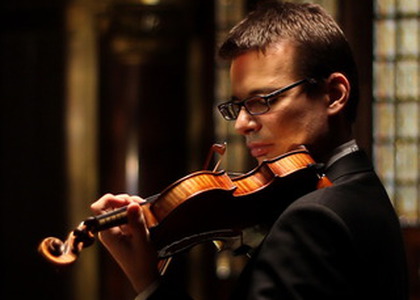 ALEXANDRU TOMESCU will play at his amazing STRADIVARIUS Elder-Voicu violin one of the most well-known and often performed concerts ever composed from all over the world: The E minor concert signed FELIX MENDELSSOHN.

On Wednesday, 21st of April, from 7 pm, you will watch this event live from the Radio Hall, presented by the Radio Room Orchestra, live on Facebook too, but even on the Radio waves. The concert is a revolutionary work creation for the times when it was composed and test the vituosity of the soloist since the first musical notes. Mendelssohn composed the masterpiece for his good friend, the violonist Ferdinand David, which he performed for the first time in 1845, at Leipzig.

The concert at Sala Radio will be conducted by JÓZSEF HORVÁTH. In the second part of the programme you will listen to a rarely performed work, but extremely beautiful: The D Major Symphony, work creation of the czech composer, JAN VOŘÍŠEK (1791 - 1825). He built a part of his musical career in Vienna, where he met Beethoven (whom he admire very much) and Schubert, who became a very good friend. Her single symphony is composed at the early age of 30, from the 34 years of life that he had.

The concert will be transmitted LIVE at the radio - on allRadio Romania Cultural and Radio RomaniaMusical- live streaming onthe internet -the sites www.radioromaniacultural.ro and www.romania-muzical.ro, and on FACEBOOK pages, the Orchestra and Radio Chores and Radio România Muzical.

ALEXANDRU TOMESCU has been a soloist at the Radio Romania Orchestra since 2002. He got some scholarships in the USA and Switzerland. Among his numerous national and international competitions, we mention:
"Paganini" Contest (Genova, 1995), "Marguerite Long - Jacques Thibaud" Contest (Paris, 1999) and "George Enescu" (1999) Contest.

He has performed under the baton of important conductors,such as Kurt Masur and Valery Gergiev, Vasilii Petrenko, together with pianists like, Valentina Lisitsa and Eduard Kunz on famous stages as Berliner Philharmoniker, Carnegie Hall, Concertgebouw, Théâtre des Champs-Élysées.

ALEXANDRU TOMESCU has gained in November, 2018 - for the 3rd time - the right to play the STRADIVARIUS Elder-Voicu violin, following the national contest, for the next 5 years, until 2023. The violin has been used for 4 decades by the great violonist, Ion Voicu. Stradivarius International Tournament is one of the most successful projects, with hundreds of concerts, in dozens of settlements in the country and abroad, with programmes that include a few full events for the romanian musical life.

For more information about Radio Orchestras and Choirs, please search on www.orchestreradio.ro website.