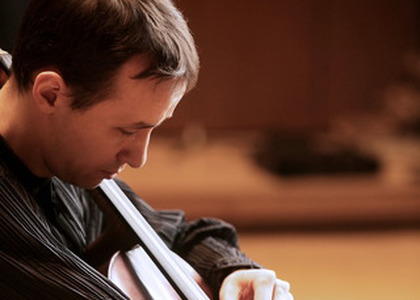 From Tchaikovsky to Arensky, a concert broadcast LIVE by the RADIO HALL

Russian pianist and composer Anton Arensky studied (at the Petersburg Conservatory) with Nikolai Rimsky-Korsakov, and later became a professor at the Moscow Conservatory, where Sergei Rachmaninoff was one of his students. In 1894, a year after Tchaikovsky's death, he created, in the memory of the recently deceased, "Variations on a theme by Tchaikovsky", a work that the public immediately enjoyed.

Wednesday, on the 12th of May, from 7PM, you will listen to "Variations on a theme by Tchaikovsky" by ARENSKY and "Variations on a rococo theme for cello and orchestra" by TCHAIKOVSKY in a beautiful concert broadcast live from the stage of the Radio Hall, performed by the RADIO CHAMBER ORCHESTRA. The second piece will be an opportunity to appreciate RĂZVAN SUMA, soloist of the Radio Choirs and Orchestras and one of the most famous Romanian cellists.

The night will end with SCHUBERT'S Symphony no. 3 and the whole concert will take place under RADU POPA's baton, conductor of the "Banatul" Philharmonic from Timișoara.

As a graduate of the National University of Music Bucharest, RADU POPA continued his studies at Hochschule für Musik in Wien. He was educated under the guidance of world-famous Romanian conductor Erich Bergel, a brilliant student of Herbert von Karajan.

Being a permanent guest of the Romanian orchestras, Radu Popa's career unfolds between the important concert stages of Romania (Romanian Athenaeum, Radio Hall) and touring abroad. Radu Popa was applauded on the podium of the Giuseppe Sinoppoli Hall of the famous Rome Auditorium (in the company of the Radio National Orchestra - 2009), or at the desk of the philharmonic orchestras Janacek - Ostrava (Czech Republic), Transylvania - Cluj-Napoca, Banatul - Timișoara etc. Paris, Basel, Baden-Baden, Mannheim, Göteborg, Lvov are some of the destinations where the artist has concerts.

Following the awarding of the Grammy Prize to composer Osvaldo Golijov, the renowned Deutsche Grammophon label - Sonyclassics.com released on CD the soundtrack of the Youth without youth movie, directed by Francis Ford Copolla. The soundtrack was performed by the Bucharest Metropolitan Orchestra from Romania, under the baton of Radu Popa.

Having an extensive repertory, achieved in hundreds of recitals and concerts performed throughout the whole world, cellist RĂZVAN SUMA is one of the most active Romanian musicians. Apart from his concert activity in Romania, he frequently sings together with the Spanish pianist Josu Okiñena, with whom he performed in halls such as the National Auditorium in Madrid, Teatro Colon in Buenos Aires, Belém Cultural Centre in Lisbon, Kursaal in San Sebastian or Casa de Musica in Porto.

As a soloist of the Radio Romania Choirs and Orchestras, Răzvan Suma is known to the public from all over the country thanks to his national tours since 2012: Do you like BACH?, Do you like BRAHMS?, Do you like TANGO?, Do you like CELLO? and so on. In addition to these, there are the Spanish Night and British Night tours and the ArgEnTango: Piazzolla - An authentic story and Tango at THE CASTLE group tournaments.

For more information about the Radio Choirs and Orchestras please check out the www.orchestreradio.ro website.