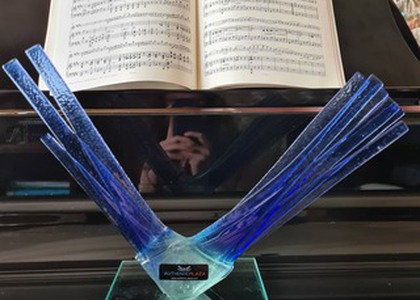 The "Youth of Music" International Competition 2021, organised by the Bucharest Municipality Museum together with the MuseArt Association, announced the winners of its first edition, after a long and meticulous process of selection. Thus, for the first age category (musicians up to 18 years old), the winner is the Hungarian saxophone player MagyaryTimot, aged 16. The winner of the second age category (18-24 years old) is the pianist Mia Pecnik, aged 21, from Croatia. The young Romanian cello player ȘtefanCazacu, aged 27, won the competition's trophy for the third age category (musicians up to 30 years old).

24 prizes have been awarded to young musicians from 14 countries, students coming from prestigious schools all over the world. The complete list of winners is available on the competition's website, at link.

"Congratulations to all participants and winners of this first edition of our "Youth of Music" International Competition 2021. In the coming period of time, the winners will be preparing for concerts, I wish them all further good luck. I hope they will enchant the public, just as they enchanted us with their outstanding pieces during the competition. You will meet some of our champions in the spaces offered by the Bucharest Municipality Museum, an institution that continuously encourages and promotes art and culture among younger generations", said Adrian Majuru, the director of the Bucharest Municipality Museum, who organised the competition, thus giving the opportunity of having concerts in the magnificent halls of Bucharest.

130 young artists, aged between 9 and 30, signed up to participate in the "Youth of Music 2021" International Competition, divided in three age categories. The focus was on classical music, the contestants distributed in 15 categories designated to instrumentalists and lyricists. The large number of participants testifies to the need of young musicians to share their art with the great public and their wish to perform in Romania.

"The competition was a real success, and exceeded even the most optimistic of expectations. Sînziana Mircea, the one who initiated this extremely ambitious project, especially during these times marked by the pandemic, deserves all our congratulations. The stakes of the contest were very high, and the young people came here from 3 continents, 130 participants! However, I have to make note of the fact that many of them came from Romania and were at a disadvantage in comparison to their peers coming from other countries, because of the poor state of their instruments, especially the pianos. This is a chronic issue of Romanian music schools, and I hope, at one point, to be able to see a change for the better. The most important thing is that, besides the prize money, the concerts given to the winners will become an important launchpad for them", said violinist AlexanduTomescu, president of the jury.

The gala featuring winners' recitals will take place during the "Youth of Music" Festival 2021, hosted by the Bucharest Municipality Museum at the end of July, and they will be broadcasted online on the YouTube and Facebook pages of the Bucharest Municipality Museum, as well as on the official pages of the MuseArt Association. The special awards concerts in Transylvania will be organised this summer at the Cultural Centre in Arcuș, Covasna county.

The pianist Verona Maier, Vice-Rector of Music University in Bucharest and member of the jury, stated that:"It is an undisputed success, not only thanks to the large of number of contestants who came here from all corners of the world with recordings that we could listen to right here, but also thanks to the performances' quality of those brave enough to participate. What we heard was extremely intense and incredibly expressive, transcending the barriers of a mere recording. I am hopeful for a "normal" version of this artistic actas soon as possible, on the scene, both for the good of this contest, as well as for all these musicians".

"I was thrilled to listen to a new generation of young musicians, among whom we found outstanding talents from all over the world.I wish them all good luck in their careers and we are waiting to listen to them all in Bucharest", said Liliana Staicu, member of jury, musicologist and director of the Romanian Radio Orchestras and Choirs.

"The experience of being a jury member for the first edition of the "Youth of Music" Contest was eye-opening, indeed. The variety of the repertoires, the different techniques and styles of the contestants, the artistic specificity, particular to each participant, have put me into a very difficult position when having had to choose the winners. I am very happy and eager to see some of these musicians evolving on the Romanian scenes.We need as many of these initiatives", added AlexandruMija, member of jury, conductor and manager of the EUYO-EU Youth Orchestra

Laura Tătulescu, soprano, stated:"In a time when the doors of the concert and orchestra halls have been closed off, this contest has given support and hope to the youth when they needed it most, showing that, despite all obstacles, music and art will always have a voice. I am thrilled to have been part of this project."Laura Tătulescu is the one who offered the prizes for two of the contestants.

Among the special prizes, we name "Electrecord", "PassadoriPianoforti", the "Lirica" and "Opera Masterclass" prizes offered by the renowned soprano Laura Tătulescu, the "Talent Remarcabil", "Mecena" and "IancuTucarman" prizes, as well as recitals "Debut înTransilvania" at the Cultural Center in Arcuș. The distinctiveness of this competition was given by the fact that participation was not allowed for current music students, as well as ex jury members from the last two years.

About the Bucharest Municipality Museum

It comprises: the Suțu Palace, Cesianu-Filipescu Museum, Theodor Aman Museum, George Severeanu Museum, Victor Babeș Museum, the Bucharest Observatory-AmiralVasileUrseanu, Dr. Nicolae Minovici Museum, Frederic Storck and Cecilia CuțescuStorck Museum and the Ligia and Pompiliu Macovei Art Collection. MMB is an information, cultural and educational centre, the active "headquarters"of an entire network of cultural organisations. The museum is landmark for the cultural communities of Bucharest, and for the scientific and academic medium alike.


Translated by Ioana Grigoruță,
University of Bucharest, Faculty of Foreign Languages and Literatures, MTTLC, year I
Corrected by Silvia Petrescu
Return to Events