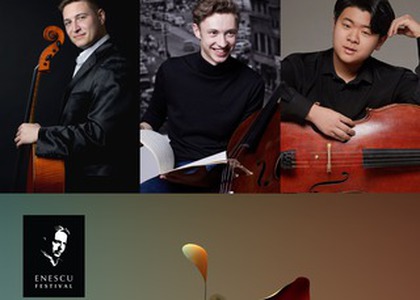 New Amazing record at the Enescu Competition: the youngest artist in the history of the event enters the finals at 14 years old.

5 young cellists from 4 countries have participated in the Semi-finals that took place on Thursday 13th of May at the Romanian Athenaeum. These were: Stefan Cazacu (Romania), Sebastian Fritsch (Germany), Anouchka Hack (Germany), Jaemin Han (South Korea) and Keisuke Morita (Japan). The young musicians had a complex schedule, which included performing a sonata by George Enescu. The 14 years old cellist Jaemin Han is as of now the youngest competitor to have entered the Semi-finals and Finals in the history of the Enescu Competition.

The judging was handled through a hybrid system: 5 members of the jury are present in Bucharest viewing the recitals of the Semi-finalists live at the Romanian Athenaeum and 5 have viewed the young musicians' performance online.

The public can listen to the Cello Section Finals on Saturday 15th of May, at the Romanian Athenaeum from 18:00. This Section consists of three orchestral concerts performed by the finalists of the Section.Said concerts are: Dvorak Cello Concerto in B minor Op. 104, Elgar Cello Concerto in E minor Op. 85 andShostakovich Cello Concerto No. 1 in E flat Major Op. 107.

Tickets for the Cello Finals as well as for the other events of the Competitions are exclusively available online on the www.festivalenescu.ro site via the Eventim platform or directly from the Eventim site throughthis link.The concerts can be viewed in the Athenaeum hall where the price of a ticket is 65 RON. Access to the concert hall can only be granted by adhering to certainsanitationrules(link) and the number of seats that are being sold represents 30% of the number of available seats. The organizers have also offered tickets and subscriptions for the online viewing of extraordinary concerts and recitals. These can be purchased here.

Stefan Cazacu (born 1994) studied in Bucharest and Vienna with professors Marin Cazacu, Razvan Suma and ReinhardLetzko. He held recitals in Romania, The Netherlands, Israel, Austria, Germany and collaborated as a soloist with all of the symphonic orchestras in Romania as well as the Chisinau Philharmonic and with Alicante's Youth Orchestra.

Sebastian Fritsch (born 1996) studied at the Universities of Music in Freiburg and Weimar, having finalised his studies at the Kronberg Academy guided by Professor Wolfgang Emanuel Schmidt. Winner of the 2019 Musical Competition in Germany, Sebastian plays a Thorsten Theis cello from 2016.

Jaemin Han (born 2006) received awards at the Osaka International Competition and at the International Dotzauer and David Popper Cello Competitions. He is guided by professors Kangho Lee and Myung-wha Chung and performed in concerts as a soloist with the Wonju, Seul and BucheonPhilharmonic Orchestras.

The Cello Awards are valued at 30.000 Euros and the winner gains the possibility of performing on the Enescu Festival stage, as well as special awards and opportunities for international promotion.

The 2020 International George Enescu Competition carried out its first phase last year with the promise of bringing "Beauty in life", in spite of the pandemic. The Competition was reimagined online with a debut consisting of the world of international classical music - the first two phases of the sections were organized online. This measure was taken in order to be able to hold the Competition despite the pandemic. As such 205 young artists were able to follow their dreams and participate in the Competition between the 29th of August and the 20th of September 2020. The last two phases - The Semi-finals and Finals - are organized live in Bucharest at the Athenaeum between the 13thof May and the 23rd of May 2021 with a live audience.

In 2020, the International George Enescu Competition offered more than just music and competition. The message of this edition is "Beauty in life" and given the pandemic context, the Enescu Competition has proposed to show that we all have the power to reinvent ourselves in order for us to gain happiness and beauty in our lives. In such a confused world, reduced to silence and pandemic isolation, we created anexample of resilience rooted in the necessity of beauty in life, which is imperative for our humanity.

The campaign announcement can be viewed with this link: https://www.youtube.com/watch?v=UxuylvvHHWQ

The complete program of the Competition can be viewed here. The full lists of the competitors that shall participate in the Semi-finals Sections can be found at www.festivalenescu.ro under "Results".

The George Enescu Competition functions as an international platform to highlight skilled future musicians of the world and to promote the compositions of the great Romanian musician to the new generation of artists across the world. As such, it is a given addition to the George Enescu Festival, the most important international cultural event organized in Romania. The Competition has four sections - violin, cello, piano and composition - and regarding classical music competitions worldwide, this competition is placed in the top five.