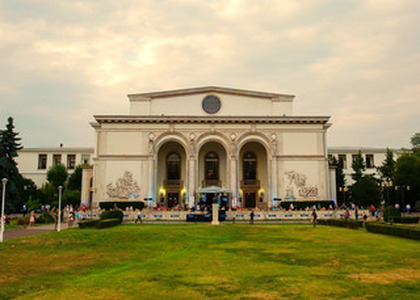 We are waiting for you this week, in the Grand Hall, with three famous titles from the current repertoire. The opera "Nabucco" by Giuseppe Verdi, "Madama Butterfly" by Giacomo Puccini and the ballet "Don Quixote" by Ludwig Minkus, are our proposals for four evenings among musical chords and unbelievable choreography.

The Bucharest National Opera House presents on Wednesday, June 16th, and on Friday, June 18th, starting with 6.30pm, the show "Nabucco" by Giuseppe Verdi. The conductor will be Vlad Conta. The show "Nabucco" by Giuseppe Verdi is one of the longest-lived creations in the history of the Bucharest National Opera House. For this production, the late director Hero Lupescu, one of the most appreciated creators of performances in the history of Romanian lyrical theater,who worked with large ensembles, managed to shape a special personality to the Choir, turning it into a single character, as it was perceived in the ancient theater.

On Saturday, June 19th, starting with 6.30pm, the Bucharest National Opera House presents the show "Madama Butterfly" by Giacomo Puccini. The conductor will be Tiberiu Soare. In Romania, "Madama Butterfly" was present on the Bucharest stages shortly after the world premiere, which proves once again that the Romanian lyric band was up to date with all the new compositions of the time. For decades "Madama Butterfly" was present in the repertoire of the Bucharest National Opera, with valuable distributions in which all the big names of the first lyrical scene in Romania excelled. It is one of the most famous works in the world, the story presents the consequences of a boundless devotion.

On Sunday, June 20th, starting with 6.30 pm, the Bucharest National Opera House presents the ballet"Don Quixote" by Ludwig Minkus. The conductor will be Ciprian Teodorașcu. Rhythm, color, lively atmosphere of a small town in Spain, picturesque characters inspired by the famous novel signed by Cervantes, a spectacular choreography with many moments of virtuosity in the interpretation of an exceptional cast.

Tickets can be purchased at http://tickets.operanb.ro/ and at the Ticket Office of the Bucharest National Opera House.

In order to enjoy each show safely, the performances have been adapted to comply with the official rules in force. We remind you that wearing a mask is mandatory, the social distance will be respected, and the show will take place without a break. Access to the performance hall will be one hour before the start of the performance, based on the ticket (physical or electronic). In order to participate in the performances of the Bucharest National Opera House, vaccination and testing are not mandatory.