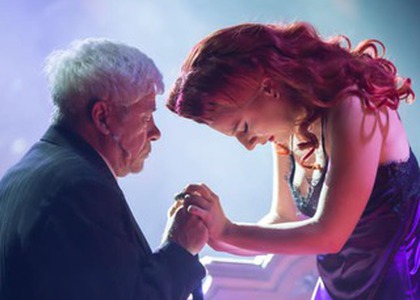 Yes. I think we can already talk about a successful brand: Răzvan Mazilu @ aociații through associates understanding the couple of actors-singers-dancers Ana Bianca Popescu and Lucian Ionescu. The two have been playing together for over a decade. I met Răzvan Mazilu, I think, for the first time, in 2014, on the stage of the Odeon Theater, in the show with West Side Story, a musical by Leonard Bernstein. They then parted ways: Bianca worked Anita in Mon Cabaret Noir, directed by Răzvan Mazilu (Teatrelli, 2015) and Fionnula in Our Ladies of Perpetual Succour by Lee Hall, directed and choreographed by Răzvan Mazilu (2017 Teatrelli). They met again in 2019 in the famous and spectacular musical We Will Rock You performed by Răzvan Mazilu on the stage of the Palace Hall in front of thousands of extremely enthusiastic and noisy spectators, then in the blockbuster Sound of Music, on the stage of the Children's Comic Opera (2020 ) when the same Răzvan Mazilu signs the direction, the choreography and the costumes. In the Adams Family (Excelsior Theater) Lucian Ionescu plays "alone" (Excelsior, 2019, directing, choreography and costumes - Razvan Mazilu) but now, in this tormented 2021, Bianca, Lucian and Răzvan find themselves in a successful trio in the show Maria de Buenos Aires also on the small stage at the Teatrelli. The score is appreciated as a small opera, more precisely as a tango opera with music written by the incomparable Ástor Piazzolla on a libretto by Horacio Ferrer presented for the first time on May 8, 1968 in Buenos Aires. The scene is divided between a few characters - Maria / Ana Bianca Popescu, the spirit / Gheorghe Visu and the Flașnetarul, the Dreamer, the Old Thief, the First Analyst, the Priest / Lucian Ionescu.The story is simple and old since the world - a love story that takes you from sordid spaces to oases of incredible purity. There is no proper action, a logical development of facts but only feelings triggered by memories, collages of emotions and images in which coherence is deliberately thrown into the background. A necklace of precious pearls, strung on a thin thread, ready to break, separated each and yet together in an invaluable jewel. Of course, Piazzolla's music carries all the weight, a weight that can easily bring down an immature or insecure performer. This is not the case of the two exceptional artists from whom Răzvan Mazilu can argue EVERYTHING. Being in front of the audience all the time, they have to fill with the same tension that sometimes crushes you, and the minutes of action and those of silence. Because life, love and death dance in the game. From the first to the last sound. The show then interweaves the words spoken from verses whose meaning you do not always understand immediately and the unspoken words but sung by the accordion and all the instrumental ensemble that accompanies it. Actor Gheorghe Visu and accordionist Emi Drăgoi lived intensely, sensitively and deeply, every moment of their scores. And us, with them.

Răzvan Mazilu appears again on the poster as a director, choreographer and costume designer. The space created by the scenographer Dragoș Buhagiar is small and loaded with details but not at all restrictive. A bed is the place where Mary lives her life in inexhaustible rainbow colors. The movement, from the trembling of a finger to wide steps and passionate about tango, alone or in two, ignores any walls and leaves room for the flight of imagination. Wonderful costumes, in folds of precious material or in collages of patches, highlight the beauty of a body or the grotesqueness of a character. Everything, in perfect harmony.

When you have done so many beautiful things together, when the years go by and no one gets bored, when the director always returns to the same actors and when the actors are happy that, at each reunion, the spiral of their development goes up a little / a lot… you have no reason to stop. Thus, at the end of the comment, a question arises of its own accord: What's next? The answer is awaited with anticipation, curiosity and joy.

The Flasher, The Dreamer, The Old Thief, The First Analyst, The Priest: Lucian Ionescu

With the participation of Emy Drăgoi on accordion

Musical coordination of the orchestra: Corina and Alexei Țurcan

The show is not recommended for people under 16.