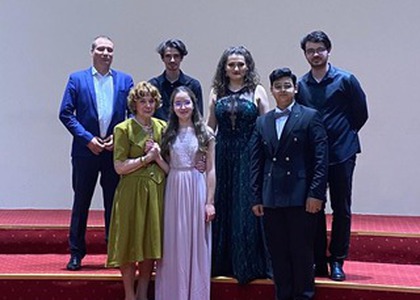 Echoes of the Young Talents Festival from Râmnicu Vâlcea, May 15th-17th, 2022

It was again a celebration at the "Ion Dumitrescu" Philharmonic in Râmnicu Vâlcea where the "Young Talents" Festival took place, now in its 42nd edition.

I attended a meeting of young performers from all over the country who were united by their talent and love for music. There were instrumentalists and singers from Bucharest, Ploiești, Timișoara, Pitești, Cluj and, of course, RâmnicuVâlcea. Some of them may not have even dared to dream of singing on the stage of a philharmonic, especially in a festival with a history of remarkable richness that Mrs. Augustina Sanda Constantinescu, co-founder of festival:

"The festival was born at the initiative of the Union of Composers, when VasileDonose took the initiative to set up a festival of young talent in Romania. The festival was based on a generous idea, that of providing a stage without rivalries, without rivalry one prize, one confrontation, more a collegial exchange both between the schools in Romania and of the participants, of course.

Râmnicu was a fertile ground because the Society "Friends of Music and Theater" led by Professor Irina Șaschi, who played a major role in the musical development of Râmnicu, had set up summer music courses. "

We enjoyed the timbre of various instruments, wonderful voices in the three concerts that took place on May 15th and 16th. The audience participated interactively in the events, filling in the voting forms provided to express their preferences, prominent personalities of the Romanian musical life offered distinctions and awards.

I also had with me the pianist Ilinca Dumitrescu, the daughter of the composer Ion Dumitrescu, actively involved in the organization of the "Young Talents" Festival from RâmnicuVâlcea:

"My father was born in the commune of Oteșani, near Horezu, and Horezu - as everyone knows - is 60 km from Râmnicu Vâlcea. All my life I grew up, when my father still lived, in this atmosphere of extraordinary love for the lands of Vâlcea, for the people here, for the talent and intelligence of those who lived and still live here. I have always been with Vâlcea County and the city of Râmnicu Vâlcea. "

The "Ion Dumitrescu" Philharmonic Orchestra accompanied the young performers in the gala concert. At the desk was the conductor Matei Corvin, who currently lives in South Africa, praised by critics as an international conductor, professor emeritus at Stellenbosch University.

In the first part of the gala concert we enjoyed the show "Spring Smile" offered with great professionalism by the students of the singing class of soprano GeorgetaStoleriu, university professor at UNMB.

And in the second part I appreciated two special interpretations of W.A.'s music. Mozart; I listened to the flutist Eduard Miclea and the pianist AndraMărgineanu in concerts.

Next, Mr. Petruț Constantinescu, the director of the "Ion Dumitrescu" Philharmonic from RâmnicuVâlcea, shares some details related to the organization of the "Young Talents" Festival, 2022 edition:

"A pearl of the season, the 42-year-old" Young Talents "Festival, takes place in May. Each edition comes with something new, especially since last year, the" Young Talents "Festival is a registered trademark of The "Ion Dumitrescu" Philharmonic is a city brand. We do our best to attract the public. We are glad to have young people from Romania, through our partners, such as the "Remember Enescu" Cultural Foundation with the kind teacher Mihaela Tomescu. , which brings together many young people from Romania with an exceptional record - all are Olympians, all are awarded nationally and internationally. Doctor Ilinca Dumitrescu, president of the festival, also makes recommendations at the highest level and promotes high value young people "We, Râmnicu Vâlcea, always try to keep up with the local talents - children and young people who go to national and international competitions, obtaining deserving prizes."