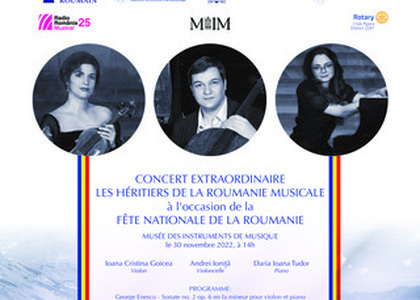 Violinist Ioana Cristina Goicea, cellist Andrei Ioniță and pianist Daria Tudor - three of the most internationally famous and appreciated Romanian musicians of the moment - perform an extraordinary chamber concert in Brussels, marking the celebration of ROMANIA'S NATIONAL DAY. The event will take place on Wednesday, the 30th of November, at 14.00 in the concert hall of the iconic Musical Instruments Museum (MIM) in Brussels, in the heart of the city that is home to representative institutions of the European Union. The concert takes place under the umbrella of the project "The Heirs of Musical Romania", one of the most notable programmes for promoting young Romanian musicians.

The suggested repertoire for this special chamber afternoon puts the spotlight on the work of the composer-symbol for Romania, George Enescu. The programme features Sonata No. 2 op. 6 for violin and piano, along with Sonata op. 26 no. 2 for cello and piano. The three musicians then come together to perform Ludwig van Beethoven's Trio op.70 no.1, a work featured on an album which will be released on this occasion, released by the publishing house Casa Radio, part of the Radio România corporation.

The Brussels public has free access to the concert, within the limit of available seats; the concert can be viewed live on the Radio Romania Muzical Facebook account.

The same chamber music concert will become the Christmas gift offered by Radio România Muzical to the Bucharest audience, who is invited to Sala Radio on Sunday, the 18th of December 2022, at 7 pm. Tickets available on iabilet.ro.

"The year 2022 is the European Year of Youth and focuses on the central role young people play in building a better, more inclusive future. We are honoured and happy to be able to organise in Brussels, in the heart of Europe, together with all our institutional partners, an extraordinary concert featuring three of the top young Romanian musicians: Andrei Ioniță, invited in 2019 to Brussels as part of EUROPALIA Romania, Ioana Cristina Goicea, laureate of the Reine Elisabeth Competition in Brussels in 2019, and Daria Ioana Tudor, semi-finalist of the International Competition 'George Enescu 2022' - piano category, who will perform, among others, with Andrei Ioniță at the Sala Radio in June 2021. "The Heirs of Musical Romania" is one of the most important programmes for promoting young Romanian musicians and, together with the public, we will be delighted, on Romania's National Day, to be able to hold this project in one of the most beautiful halls in the heart of Europe's capital, at the Musical Instruments Museum in Brussels", highlighted Dr. Liliana Țuroiu, Director of the Romanian Cultural Institute in Brussels.

For violinist Ioana Cristina Goicea, this concert is an opportunity to return to Brussels, after she became a laureate of the Queen Elisabeth Competition, one of the world's most important classical music competitions, in 2019. Ioana Cristina Goicea (29) is a graduate of the Hanover University of Music. The international press calls her "a new rising star on the international violin scene", and Vadim Repin described her as "a true artist with star potential". Very important awards mark the already impressive career of the Romanian violinist: in addition to the prize at the Queen Elisabeth Competition, the musician won first prize in 2017 at the Michael Hill Competition in New Zealand, first prize at the Bonn Competition, fifth prize at the renowned Indianapolis Competition. Ioana Cristina Goicea has performed as a soloist on major international stages in Europe, America, Australia, with renowned orchestras. Her international discography already includes three titles - the latest, with works by André Parfenov, released in November 2021, together with the Aachen Symphony Orchestra, conductor Christopher Ward. Since October 2020, Ioana Cristina Goicea is also a professor at the renowned University of Music and Arts in Vienna.

Cellist Andrei Ioniță (28) is the only Romanian to win the Gold Medal at the Tchaikovsky Competition in Moscow since its establishment 64 years ago. An extraordinary talent, with a brilliant technique and musicality, qualities praised by the international press. Equally interested in the concert and chamber repertoire, Andrei Ioniță has an intense solo career on the great stages of the world.

Andrei Ioniță started studying piano at the age of 5 and took his first cello lessons at the age of 8. He studied the cello with Ani Marie Paladi, while attending the National College Sf. Sava in Bucharest for mathematics and computer science; he was Jens Peter Maintz's student at the University of Arts in Berlin. His achievements also include other important prizes at the Aram Haciaturian competition in Yerevan, the ARD in Munich and the Emanuel Feuermann competition in Berlin.

In the 2019-2020 season, Andrei Ioniță was artist in residence of the Hamburg Symphony Orchestra; in this position, he performed a moving recital without an audience in 2020, accompanied by the legendary pianist Martha Argerich. Andrei Ioniță has been invited as a guest to prestigious festivals, including EUROPALIA Romania, Schleswig Holstein, Mecklenburg-Vorpommern and Verbier; on the 28th of November 2022, Andrei Ioniță will perform at the Wigmore Hall in London, live on BBC Radio 3, picked up by the EBU network.

One of Andrei Ioniță's frequent recital partners is pianist Daria Tudor (25). Daria Tudor made her concert debut at the age of 9 alongside the Bucharest Radio Chamber Orchestra; she is the winner of several national and international competitions and has given recitals and concerts on major stages, especially in Germany. In February 2015, Daria Tudor was accepted at the Universität der Künste Berlin in Prof. Pascal Devoyon and Rikako Murata's class. She is currently pursuing her master's studies in solo piano, chamber music and lied accompaniment at the same university under the guidance of Prof. Björn Lehmann, Artemis Quartet, Prof. Frank-Immo Zichner and Prof. Eric Schneider.Since May 2015, Daria Tudor has been working at the Universität der Künste Berlin as a docent in Prof. Axel Bauni and Eric Schneider's contemporary Lied classes, as well as a pianist in Prof. Konstantin Heidrich's cello class. Since 2017, she is the official accompanist of the Rutesheim Cello Academy, Germany. In June 2019, Daria was awarded the Best Young Artist Award - Enlight Prize - at the Art of the Piano Festival - Cincinnati, USA. She has attended festivals in Finland, Germany and Austria: Alpenarte - Schwarzenberg, October 2018; Kissinger Sommer - Bad Kissingen, June 2017; Mozartfest - Würzburg, June 2016; Crescendo Festival - Berlin, May 2016, 2017. In 2022, she was a semi-finalist in the "George Enescu" International Competition in Bucharest.

"The Heirs of Musical Romania" is a project launched in 2018 by Radio România Muzical, the public Romanian classical music radio station, and the Rotary Club Pipera in Bucharest. To date, more than 20 recitals and concerts have been organized under the umbrella of this project, broadcasted live on Radio România Muzical and also picked up by the EBU network; two albums with performances from these events have also been released under the Casa Radio label. Since 2020, "The Heirs of Musical Romania" also offers a scholarship worth 4000 euros, for which annual competitions have been organised; in addition to the prize money, the jury, made up of the main leaders of Romanian musical institutions, has added professional benefits: concerts, recitals, recordings. Besides the national dimension of the project, starting in 2022, the organizers, greatly supported by the Romanian Cultural Institute, have also held international events, which will continue in the coming years.