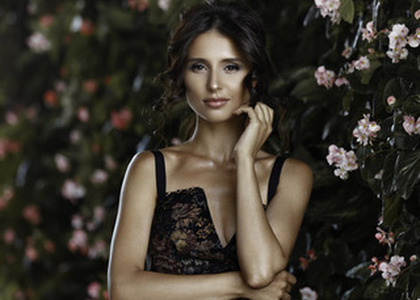 Soprano Valentina Naforniță, for the first time in our studio!

Naforniță is a charming stage presence. She has a vibrant soprano voice, rich in the middle register and wonderful silvery iridescence in the acute register (Opera International); Naforniță shone - literally - in the finals of the Cardiff Competition (Wales Online); Naforniță has real star qualities and, above all, a voice of special quality (mezzo-soprano Joyce di Donato); Sublime... she is a voice rich in harmonics, warm and even all round the whole ambitus, with spirited coloratura and unfailing musical adaptability (The Artsdesk); She's going to be a big star! A splendid career awaits her! etc. - these were the impressions after winning the BBC Cardiff "Singer of the World" competition by the Moldavian-born soprano Valentina Naforniță, a graduate of the National University of Music in Bucharest. It was the summer of 2011 and, unexpectedly, the international music world had come across an exceptional demonstration of talent, self-control and stage charisma.

"I had managed to qualify from a group of 600 contestants and I had to go to Cardiff. But I didn't yet have Romanian citizenship and a passport to ensure my departure" - Valentina recalled in our first interview. "I received my passport just one day before the deadline for submission there. I didn't even think I would make it. So I went through maximum tension even before the competition itself; but once I got there, I just focused on the programme. At first twenty of us competed; then six; and finally, when I was announced the winner of the Grand Prix and, in addition, the Popularity Award, I thought I misheard... "Were you expecting it, did you wish for such success?" - I had sked her. "Absolutely not. Honestly. In general, I never hope for anything. All I want is to be in top form on stage. I promise you..."

Fame, reputation, money (£17,000, won with the two Cardiff prizes!), a two-year contract with the Vienna Staatsoper - which was to be extended! - and a debut in 2012 at the Teatro alla Scala in Milan, the tutelage of a renowned agency for artistic impresarios (Intermusica), interviews, praise, offers, the Competition Gala broadcast live on various TV channels, etc. - all of which together and in an avalanche could have taken her away from what she had been and transfigured her good sense. Yet nothing of the sort happened to the very young Valentina Naforniță. Why? "Because I was very aware of how much I had to learn from that moment on. Both on stage and in everyday life. And now, as an employee of the Viennese Opera, I have the best opportunity to learn and meet great people and artists, to develop the way I want. I'm so happy!"...

And yet, I insisted during that first interview, "Can't you ever see yourself becoming a... a diva?" "I certainly don't want to be!" - came Valentina's reply. "Of course I had a great time wearing a dress signed by the famous designer of the House of Liska, Thomas Kirchgrabnerat the Vienna Opera Ball, singing in front of an audience representing notoriety from all fields, knowing I was promoted by all the media channels in Austria and Germany - at least. Or that I felt great coming out to applause and giving autographs. But that's not my goal after all. I've also been asked how much I was paid for my solo moments at the Ball, what commission I got. As if that's what matters most to me. And I got upset. What I'm really interested in is building a long-lasting career that I'm proud of. And to do that, I have to stay grounded and work!"

It's been exactly 10 years since the interview from which I quoted above. And the opportunity to talk again with Valentina Naforniță - offered by her presence in Bucharest for a performance of the role of Countess in Mozart's opera "The Marriage of Figaro" (Friday, at 6.30 pm, on the stage of the Bucharest Opera) - is, I think, the best way to continue / verify / complete the discussion of that time, face to face, in our first dialogue hosted by the Radio România Muzical studio.