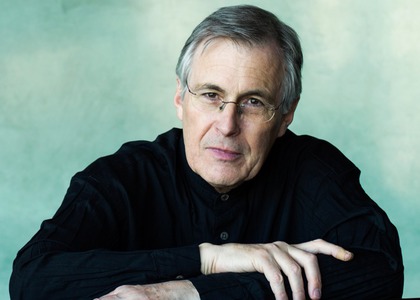 Yesterday, on the 12th of January, at the Athenaeum, took place the concert by the orchestra of the Philharmonic George Enescu alongside Christian Zacharis, who, this time too, have been both the conductor and a soloist. The program contained the suite "My mother the goose" by Maurice Ravel, Concert no. 27 for piano and orchestra by Wolfgang Amadeus Mozart, and, in the second part, Symphony no. 3 by Franz Schubert.

The audience looked foward to see the German pianist and conductor along with the Romanian musicians. The long applause determined, therefore, Christian Zacharis to offer two moments of bis, both at the end of the first part- when he performed the Rondou KV 485 by Wolfgang Amadeus Mozart, and also at the end of the second part, conducting the orchestra in the Interlude no. 3, composed by Schubert for the play "Rosamude".

We also offer you impressions of those present at yesterday's event:

"I am happy at the end of this first concert, I am already looking foward for the one tomorrow! I told the musicians too, for me it was very nice to feel that when I was telling them about music, they answered right away. I convinced myself again today that music doesn't need translation and I think the audience felt the same. The discourse was clear, simple, functioned as I expected, so I enjoy these days, especially as I like very much this hall of the Athenaeum, I feel like home here."

"The fact that the Philharmonic 'George Enescu" has this chance to be conducted by maestro Zacharis is indeed an opportunity for it, but also provides an additional ambition for it to continue its "obssesion" for being extremely professional. It is very important!"

"It was an wonderful concert, it is a success that such repertoire is performed in the concert hall of the Athenaeum, a repertoire that is less often approached, unfortunately, I believe, in Romania, a repertoire that highlights the qualities of an orchestra, emphasies the musical direction and a repertoire that requires expectations from both the musicians and the conductor, and Christian Zacharias showed his value in both roles- as a pianist and as a conductor and it was a beautiful night, I consider, with him and the orchestra of the Philharmonic "George Enescu".

"I was very impressed by the way in which the orchestra followed the gesture of maestro Zacgaris. It was the first time I watched him live, and in a double role, as he was tonight, I really loved it. I witheld, in particular, the performance of the concert by Mozart, because I could close my eyes and simply follow the music. I think this is the best feeling music can offer us; when a pianist as important as Zacharias is peformes and conducts, longer you trust to be carried away by music. This is what I did and for me the concert from tonight was very special. I am happy that I was in Romania for this concert!"