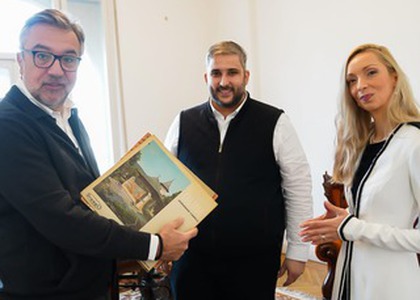 The anniversary program ‘Madrigal-60’ presented yesterday during a press conference

In 2023 Corul National de Camera 'Madrigal-Marin Constantin' celebrates 60 years since it was founded. This was the motivation behind the press conference that took place today, the 16th of January at the formation's office. In the presence of the Minister of Culture, Lucian Romeascanu and the members of Corul National de Camera Madrigal- Marin Constantin, and the manager of the ensemble Emil Pantelimon a short but yet impressive balance of the year 2022 was presented. Not less than 84.000 spectators had taken part of the 33 performances held by the Madrigal in Romania and the amount of money expected to be collected from the tickets selling were exceeded by 430%.Successful concerts were also performed by the ensebmle in Berlin, Zagreb and Belgrad;and in the national program "Cantus Mundi" - conducted by the members of the Ensemble - participated 314,000 children and over 4200 teachers.

Lucian Romașcanu, Minister of Culture: I am here to offer my congratulation to the members of the Cor National de Camera Madrigal, to wish them a happy anniversary and assure them that all the support they would need from the ministry will be given to them. You are one of the most important cultural ambassadors that Romania has.

Emil Pantelimon, manager of the Cor Național de Cameră "Madrigal-Marin Constantin": Corul Madrigal is the first choir that, during the Communist Era, had sung carols to the Romanian people, even though they were banned and released on the Romanian market only to be exported. The Madrigal is the ensemble with the most CD released and re-edited from the history of Romania. Secondly, the Madrigal had changed Romania through its music and not only this, but also the mindset that people had on Romania. In the context of the 'Prague Spring' the Madrigal went to Moskov in 1969, but also in the USA. In this context, the biggest tour of the Madrigal, with 65 concerts in a 3 month period was achieved.

The anniversary program that would be carried out during all throughout this year under the title 'Madrigal-60' is divided into six sections: 'Excellence in Music', which will consist of concerts, recitals and extraordinary performances, including the "George Enescu" International Festival, then 'Uniting Romania through Music- the already traditional tournaments for Easter and Christmas, the Ave-Maria tournament and a tournament dedicated to Timisoara, the European Capital of Culture. The 'Madrigal Diplomacy' section with international tournament in Brussel, the Bucharest-Istanbul-Berlin tournament which commemorates the year of DimitrieCantemir, tournaments in Peru and the USA. The Madrigal will carry on with the national program 'Cantus Mundi', the biggest program of social integration through music under various forms, and the fifth section of the 'Madrigal-60' contains different events, including the attendance at Art Safari, while the last section consists of editorial, multimedia, discographic and vinyl releases, such as those of the biographic volume 'Madrigal-60' and the vinyl carrying the same name, the 'Antic and Contemporan- Madrigal at Machu-Pichu' or the 'Madrigal-Ambasador cultural' volume.

Emil Pantelimon recalled important moments in the history of Madrigal's 60 yearsfor the representatives of the press, such as the first concert of carols held by the Madrigal at Sala Radio, at the end of 1966 or one of the concerts held for the miners ofValea Jiului in 1970.

The meeting ended with an invitation for the first concert of this year, conducted by Anna Ungureanu, which would take place on Saturday, January 21st at the Romanian Athenaeum, dedicated to the National Culture Day and with a short musical fragment -'Jocuri' by Cornelia Tăutu - performed live by the ensemble.