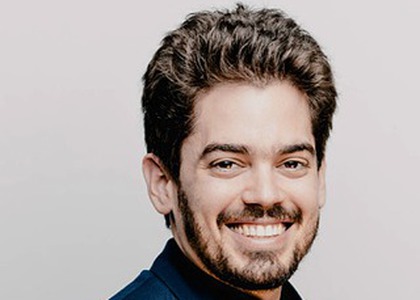 Lahav Shani and Gil Shaham, LIVE from the Herkules Hall in Munich

The violinist Gil Shaham, artist in residence of the Bavarian Radio Symphony Orchestra during the 2013-2014 season, returns to the Herkules Hall in Munich as the soloist in Samuel Barber's Concerto for Violin and Orchestra. The concert will take place on both the 19th and 20th of January 2023 and I recommend you the latter, which will be broadcasted live on Radio România Muzical. The poster also lists Short Ride in a Fast Machine by John Adams, the musical piece the concert will open with, and Symphonic Dances, Op. 45 by Sergei Rachmaninoff, which will mark the concert's finale. The conductor who will stand at the rostrum is Lahav Shani.

One of the most important violinists of our time, Gil Shaham is a multiple Grammy Award-winning musician who has been named "Instrumentalist of the Year" by Musical America in 2012. He not only performs concertos throughout the world, accompanied by renowned orchestras and conductors, but also gives recitals. Among his most notable achievements of recent years is the recording of the complete sonatas and partitas for solo violin by J.S. Bach. This season as well, accompanied by the orchestra, Gil Shaham will continue his exploration of "Violin Concertos of the 1930s", which include works by Barber, Bartok, Berg, Korngold, Prokofiev, among others. Born in Champaign-Urbana, Illinois, in 1971, Shaham moved with his parents to Israel, where he began studying violinat the age of seven with Samuel Bernstein of the Rubin Academy of Music. He received annual scholarships from the America-Israel Cultural Foundation and in 1981 he made his debut with the Jerusalem Symphony Orchestra and the Israel Philharmonic Orchestra, and the following year won first place in Israel's Claremont Competition. He then became a scholarship student at Juilliard School of Music in New York, while at the same time studying at Columbia University. Gil Shaham was awarded the Avery Fisher Career Grant in 1990, and in 2008 he also won the Avery Fisher Prize. Gil Shaham plays the Countess Polignac Stradivarius violin from 1699 and the Antonio Stradivari violin, which wasmade in 1719, at Cremona.

His stage partner for the concert on the 20th of January is orchestra leader Lahav Shani, who has been the chief conductor of the Rotterdam Philharmonic Orchestra since 2018. Starting from the 20/21 season, he is also the music director of the Israel Philharmonic Orchestra, taking over from Zubin Mehta, who held this position for 50 years. Previously, Shani was principal guest conductor of the Vienna Symphony Orchestra. Shani's close relationship with the Israel Philharmonic Orchestra began more than 10 years ago. He debuted with the orchestra as a pianist, at the age of sixteen, and, in 2007, when he was eighteen, he performed Tchaikovsky's Piano Concerto under the baton of Zubin Mehta. He continued to perform regularly with the orchestra, but this time as a double bassist. In 2013, after having won the Gustav Mahler International Conducting Competition in Bamberg, the orchestra invited him to step in and conduct the season-opening concerts and since then, Lahav Shani has returned every year to perform with the orchestra as both a conductor and a pianist. Among the most important recent and future engagements as a guest conductor are those with the Vienna Philharmonic, Berlin Philharmonic, Leipzig Gewandhaus Orchestra, Bavarian Radio Symphony Orchestra, London Symphony Orchestra, Filarmonica della Scala, Boston Symphony Orchestra, Chicago Symphony Orchestra, Royal Concertgebouw Orchestra, Philadelphia Orchestra, Budapest Festival Orchestra, Orchestre de Paris and Philharmonia Orchestra. In the 2022/2023 season, Shani will begin his three-year residency at Konzerthaus Dortmund. Born in Tel Aviv in 1989, Shani began studying piano at the age of six with Hannah Shalgi, before continuing with Professor Arie Vardi at the Buchmann-Mehta School of Music. He went on with his studies, studying conducting with Professor Christian Ehwald and piano with Professor Fabio Bidini at the Hanns Eisler School of Music Berlin, and had Daniel Barenboim as a mentor during his time studying there.

The three composers listed on the concert poster are linked by the American territory: John Adams (aged 75) is American, Samuel Barber was American as well, and Sergei Rachmaninoff, although of Russian descent, spent a good part of his life in the United States of America. Moreover, the orchestral suite Symphonic Dances, Op.45, was written in its entirety while living in the New World.