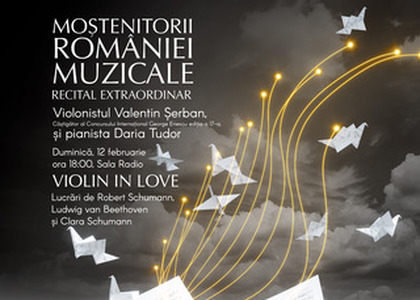 The Heirs of Musical Romania: Violin in love with Valentin Șerban and Daria Tudor

For people who are dearly in love with music, a recital-event at Radio Hall by the violonist Valentin Șerban, winner of the Enescu Contest - 2020/2021 edition, and the pianist Daria Tudor: "Violin in love". The program will include works by the famous musician couple of the 19th century, Robert Schumann and Clara Schuman. No. 2 Sonata for violin and piano by Robert Schumann is an opuscreated during the last years of the German musician, a romantic style icon. It is a work in which he embeds the wisdom of maturity, but also the pathos of love - the piece was performed for the first time alongside his very wife, Clara Schumann, at the piano.

The three romantic poems for violin and piano were created by Clara Schumann in 1853, two years after her husband had written No. 2 Sonata for violin and piano. It is the opus which proves that Clara Schumann, the one that is known as one of the greatest pianists of the 19th century, was also a very talented composer, who chose, however, to remain in her husband's shadow.

The love story between Clara and Robert Schumann has become a real legend; overcoming Clara's father fierce opposition, who had been Robert's piano teacher, the two get married in 1840; Robert dies of mental illness at the age of 46, in 1856. It is possible that this illness was also the cause of the difficult sentimental period before his marriage; Clara would live 40 more years without getting married again.

The musical program from Radio Hall, dedicated to love and its delicate twists and turns, is supplemented by Sonata No. 4 for piano and violin by Ludwig van Beethoven, opus created in 1801, a year after Beethoven had written his first symphony. It is around the time he falls in love with Countess Guicciardi, to whom he would dedicate one of the best-known Beethovenian sonatas for the piano: the famous Moon's Sonata, op. 27, no. 2.

The recital from Radio Hall is a part of the project "Successors of the musical Romania", hosted by Radio România Muzical and Rotary Club Pipera, and it is the first one to be developed in collaboration with Artexim. In the period ahead, Radio România Muzical and Artexim are set to work on many other projects for young Romanian musicians, winners of the international contest "George Enescu".

Tickets are available on
www.iabilet.ro.

"An unusual talent", as conductor Cristian Mandeal would describe him, Valentin Șerban has drawn the attention of the Romanian and international music world after receiving the first place at the International Contest "George Enescu", 2020-2021 edition. His performance for the finals, when he interpreted the difficult concert of Jean Sibelius, remains one of the most emotional moments in the history of the contest, Valentin being gravely ill at the time.

Valentin Șerban, age 32, is originally from Brașov, the city where he studied at Transilvania University; he improved under the guidance of famous violinist Silvia Marcovici at the University of Music Graz. He was a member of the Romanian Youth Orchestra andthe Ensemble Les Disonances, led by David Grimal. His intense concert activity takes place both in Romania and abroad, the intensity of living through his performances, the elegance and purity of the sound being appreciated universally.

Daria Tudor, aged 25, has had her concert debut at only 9 years old, alongside the Bucharest Chamber Orchestra; she is a laureate of numerous national and international competitions and has had recitals and concerts on great stages, especially in Germany. In February 2025, Daria Tudor has been accepted at the Universität der Künste Berlin, as part of the class of prof. Pascal Devoyon and Rikako Murata. Currently, she continues her master degree studies for solo piano, chamber music and Lied accompaniment at the same university, under the guidance of prof. Björn Lehmann (Artemis Quartet), prof. Frank-Immo Zichnerand prof. Eric Schneider.Since May 2015, Daria Tudor has been working at Universität der Künste Berlin as a docent for the contemporary Lied classes of prof. Konstantin Heidrich. Since 2017 she has been an official accompanist of Rutesheim Cello Academy from Germany. In June 2019, Daria has been awarded the prize for the best young artist - Enlight Prize - during the Art of the Piano Festival - Cincinnati, USA. She attended festivals in Finland, Germany and Austria: Alpenarte - Schwarzenberg, October 2018; Kissinger Sommer - Bad Kissingen, June 2017; Mozartfest - Würzburg, June 2016; Crescendo Festival - Berlin, May 2016, 2017. In 2022, she reached the semifinal of the International Contest "George Enescu" from Bucharest.

"The Heirs of Musical Romania" project

... organised by Radio România Muzical and Rotary Club Pipera, has been following two directions during the past years. The first one aims to bring exceptional musicians and young talents of Romania on one of the most prestigious Romanian stages, the Radio Hall. These are artists that carry out an important activity abroad, but that the Romanian audience rarely has the opportunity to listen to. The project's recitals are aimed at the general public, having an accessible repertoire and lasting for an hour without a break.

Since 2018 there have been more than 20 concerts and recitals; violoncellist Andrei Ioniță, violonist Ioana Cristina Goicea, violoncellist Valentin Răduțiu, pianists Florian Mitrea, Adela Liculescu, Axia Marinescu are one of the many protagonists. Under the same project, there have also been two albums that include parts of the recitals at the Casa Radio Publishing House.


Translated by Adelina-Maria Mănăilescu,
University of Bucharest, Faculty of Foreign Languages and Literatures, MTTLC, year I
Corrected by Silvia Petrescu
Return to Events