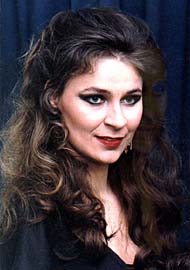 Wednesday, 2 July 2008 , ora 15.57
Mezzo-soprano Ruxandra Donose is an admirable person: her elegance, her balance, her equanimity and her friendship, which she generously offers to all those around, only help to increase and exalt her talents as a musician. I haven't had the privilege of personally meeting Mrs. Donose, and I jotted down these impressions after a seven-minute telephone interview with her. More than enough time to grasp the state of grace she inspires.

What was the reason for the interview? A new achievement in Ruxandra Donose's portfolio: on July 2nd, the mezzo-soprano performed at the Chatelet Theatre in Paris in the absolute premiere of the opera The Fly, music by Howard Shore, directed by David Cronenberg. Four performances followed at the same musical institution in Paris, and afterwards, in September, another six, at the Los Angeles Opera, with Ruxandra Donose in Veronica Quaife.


To begin with, I want to ask you, Ruxandra Donose, to tell us the extent to which interpreting a part in a contemporary work, especially when it is a premiere, differs from the parts in the classical opera repertoire.

From my standing point and ideally, they should not differ at all, because, as I have said many times now, my opinion is that each part has to be approached from a modern point of view. By saying this, I am not referring either to the way the character is dressed, or to the set that they walk about in, but to the fact that they are an authentic character and for theatre to be real, the drama has to be restored to life. Naturally, in a modern work, which we create on the spot, we start with this idea from scratch.


You are Veronica Quaife in the opera The Fly by Howard Shore. David Cronenberg, the director, is also the creator of some cult movies in the underground segment, such as Naked Lunch and Spider and, of course, the film after which the lyrical work was created and in which you perform. You were talking about the modernity of each opera character; but what does such a modern character like Veronica, a scientist and a journalist, who finds herself in the impossible situation of seeing her lover transformed into an insect, mean?

It is a very complex and rich part which, indeed, offers the possibility of a large scale of interpretations, of feelings, which have to be expressed, starting with those of the somehow tough, rough journalist worn-in by experiments and people, and is somewhat bored with being extremely overworked. Then there is this interesting situation appealing to her, this experiment which Brundle tries (i.e. Seth Brundle, the character suffering a metamorphosis). Then she is a woman in love...

Of course, the drama gets momentum in the final part, when there is this transformation of the beloved man, of Brundle -the science man -into a monster. This is actually a metaphor of a man who can change, who can get sick -and what happens to love then? How does Veronica Quaife react to such an impossible situation? Out of a movie which was a SF or even a horror one, here we have a psychological opera, with a core which many consider bewildering.


How is the music in The Fly -the opera part? Does it get close to the genre of soundtracks which Howard Shore used to do, or does it pry into other areas as well? I'm thinking of the fact that Howard Shore has also composed music for one of David Cronenberg's movies, Eastern Promises.

In Eastern Promises you already get Howard Shore's interest for the classical mark of music; I know that he uses a wonderful violin solo over there. Naturally, I would say that Howard Shore is a magnificent soundtrack composer and we know that he's been awarded an Oscar for Lord of the Rings. He was inspired and took over some themes for the music he composed for The Fly - the movie - but he developed them a lot. Thus, on the one hand, we have a flourishing instrumental part, a very rich orchestra, with a variegated character and a truly impressive sound -he is a genius of the orchestra!

On the other hand, there is his acknowledged interest, after seeing many of Puccini's works, where he admired, as he said, the fantastic combination between theatre and music, the way in which he took over the drama-part of the play - this is Howard Shore's interest in this type of music. Those listening to music go to Richard Strauss and Wagner, although one cannot actually draw a parallel between them! But the sumptuousness, so to speak, of the soundtrack, the combination with the vocal lines - sometimes melodic, yet never on a high tone, which generally, follow the rhythm of speech, offer a truly modern work, which however has some very touching musical moments.
Maria Bojin
Translated by Sînziana Mihalache
MA student, MTTLC, Bucharest University
Return to archived Interviews