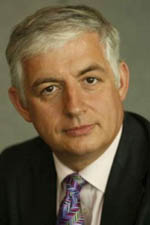 Tuesday, 8 July 2008 , ora 13.29
The 2008 BBC Proms edition (July 18th -September 13th) is the first one to be coordinated by Roger Wright as director of the festival. The quality of the programmes, approved for the past decades by personalities in the British musical sector - William Glock, Robert Ponsonby, John Drummond and Nicholas Kenyon -has consolidated the position of the most important and the most popular classical music festival in Great Britain, the latest director having the mission of developing the success of the festival for the coming years and of offering new challenges to the audience.

Roger Wright studied at the Chetham's School of Music (Manchester), getting his musical degree at the London University. After completing his university studies, he became head of the British Center for Musical Documentation, managing the largest collection of contemporary music in Great Britain.

He has collaborated with the BBC Symphonic Orchestra and with the Cleveland Orchestra as producer and artistic advisor (1989 -1992), afterwards being appointed Executive-producer and Vice-president of the Deutsche Grammophon (DG) classical music recording company.

Starting March 1997, he has occupied several managing positions within BBC Radio 3, becoming, at the same time, director of the BBC Proms Festival, in October 2007. He coordinates the activity of four BBC bands (the BBC Concert Orchestra, the BBC Philharmonic Orchestra, the BBC Symphonic Orchestra and the BBC Singers). He has received the award of the British Orchestra Association (2005) for remarkable contributions to concert life.


We are honoured to have you as a special guest to inaugurate the 2008 edition of the BBC Proms Festival in Romania. The public classical and jazz music radio stations offer music lovers a great deal of these events, and our mission is to create a connection with the concert stage and to make them grasp the spirit of this festival. Tradition is still important in the eyes of the organizers, and Henry Wood's recipe for a high quality and, at the same time, a very popular festival, remains a successful one. Which are the worthy ideas transgressing the past?

Ever since the festival's debut year -1895 - two aspects were and still remain important up to this day: the quality of the performance and the access to music, the means of bringing this performance before as big an audience as possible. Nowadays, with the help of technology, we are able to win over more and more fans, compared to 1895. By means of the radio, the television, and the internet, we can now address a global audience.


Proms is considered to be the most important summer festival, not only in Great Britain, but around the world. What is the secret of its long life and success?

I think that the secret of BBC Proms resides in the fact that it has a tradition and a particular, even personal, history. Throughout the years, the artistic standard has been kept at a high level and the audience has noticed that. Music lovers know they can come to concerts and enjoy an excellent music quality. At the same time, the audience of the festival is, in its turn, a special one, a fact sustained by the artists themselves. People are particularly enthusiastic and devoted, well acquainted with music. They can be noisy before and after, but during the concert, when they listen attentively. Some 6000 persons in the Royal Albert Hall, listening to the music with maximum concentration -is, in itself, a special fact.


You believe tradition to be very important, but at the same time, constant innovations, in the shadow of past events, bring along the signs of our musical age. In this year's edition, which do you consider to be the most innovative ideas within the musical policy of the festival?

This year's edition is based on some specific lines of development, which have been configured within the latest editions. In 2008, we tried to emphasise the festive atmosphere, and, thus, we introduced three special days of the festival: the first one dedicated to folk music, the second -to Johann Sebastian Bach's work and the third one -to Karlheinz Stockhaisen's music. These are three different experiences and, at the same time, an opportunity for our audience to spend an entire day in our company. Each of these musical themes can be approached from several standing points. For instance, several concerts are scheduled for 'Bach Day': a pipe-organ recital, a concert with The Passion according to John, and, late in the night, the three Suites for solo cello. In 'Stockhausen Day', there are also some different concerts, while 'Folk Day' will include the first free promenade concert in the history of Proms.

As you might already know, the low cost of the tickets for these promenade concerts is particularly appreciated by the audience. Another new idea is that of an intro promenade concert, as a free offer. We have scheduled such concerts for the weekend and we are eager to see which category of the audience we will manage to attract. There are people who have heard about the festival, have passed by the Royal Albert Hall, but have never stepped inside the building. This could prove to be an extremely interesting experience in the new edition.

This year we celebrate four important anniversaries: that of British composer Ralph Vaughan Williams at his 50th commemoration; 100 years since the birth of Olivier Messiaen and Eliot Carter, and 80 years from the birth of Karlheinz Stockhausen. All these artists are enormously important composers, for the 20th century, and their works will be the 'core' of our programmes. Moreover, we will 'recapture' some of the first programmes of the Proms and we have already chosen some interesting benchmarks in the history of the festival.

The idea of comparing a concert of those days with a concert of our times can be an extremely interesting one for the audience, and subsequently we will reiterate the four Concerts for piano and orchestra by Sergei Rachmaninoff. Naturally, we will continue the festival's tradition for some notable contemporary composers, as many of the works scheduled this year are being auditioned for the first time in the world or in Great Britain. We will listen to a significant number of new composers, including parts of Karlheinz Stockhausen and Eliot Carter's works.


Do you try to keep a balance between the national and the universal repertoire?

The Proms has always been an international festival. It happens to take place in Great Britain. When we take a look at the historical programmes of Henry Wood -the conductor and one of the founders of the Proms -we notice that, besides the important quantity of British music, there are also pages from the European or extra-European repertoire. There has been a gradual evolution in scheduling foreign artists at the Proms, and today, the participation of orchestras around the world is one of the most interesting aspects for our audience.


It is absolutely natural that we should also refer to the involvement of the BBC Orchestras in the festival, as to how active they are for this new edition.


The festival through the eyes of the audience -this is the most important perspective and you have confirmed this already. Resuming the topic of the audience, what is the role of the elite for the Proms, Mr. Roger Wright? Which are the programmes dedicated to the connoisseurs?

I think that all concerts address to all the categories of audience. I do not think the Proms' tradition includes this idea that some concerts are dedicated to a single category of people. For certain, the programme contains classical music works which are familiar to some of the members of the audience, and in this case, the fascination resides in hearing again that part in a particular interpretation. There are, however, people who listen to it for the first time. What we should emphasize is the quality of the performance, which makes the neophyte enjoy the music and the connoisseur appreciate the artistic level.


The Romanian audience is, mainly, a radio-audience and I think it would be interesting to describe the experience of a 'live' performance. Although we are more than 70 concerts apart from the 'Last night' of the festival, I am asking you to give us more details about this event. Why is this particular concert so famous?

It is truly extraordinary how popular the 'last night at the Proms' is; it has its particular fragrance and is - along with the New Year Concert of the Vienna Philharmonics -the most famous classical music concert in the world. Why? This concert includes famous songs. On the other hand, it has been aired on TV for so many decades now. These are arguments in favour of such a numerous audience. This year we are striving to preserve some traditional elements and combine them with the major themes of this edition. Thus, the programme includes works by Ralph Vaughan Williams -whom we are also celebrating this year, we have folk music -a genre benefiting from special promotion, we have Beethoven's Fantasy in relation to Symphony no. 9 -which are to be performed during the penultimate concert, but we also have a first audition, the creation of Anna Meredith, a young contemporary composer.

Our mission if to offer a chance not only to those performing on a regular basis at the Royal Albert Hall, but also to those in other parts of Great Britain - in Ireland, Scotland, Wales to take part in this concert. Therefore, at the concert of the BBC Symphonic Orchestra in Hyde Park we are going to reunite all these BBC symphonic ensembles, with the help of technology and we will try to create a common sound for all these orchestras, which will be placed in different spots. For this experiment, we have chosen a short piece particularly significant for Great Britain. I hope this experiment is going to be a successful one.


Mr. Roger Wright - the last invitation I am addressing you in this dialogue is to describe your experience as the director of the BBC Proms Festival. A real challenge, it may be said.

No doubt it is a challenge which I cannot accept but with a great deal of excitement, a very stimulating challenge for me. Some of my colleagues design the layout of the festival and work with me at Radio 3 BBC, leading the BBC bands, and their creativity and professionalism are a true testimony of teamwork. I am referring to an entire team, which also includes technicians, sound engineers and others.

The festival is the result of a tremendous effort of the BBC. I am very proud to be the director of this edition, but, at the same time, I am also conscious of the precious legacy and of the duty we have to carefully carry it onwards, to build the success of the BBC Proms in the years to come. Thank you for your interest in this event. It is important for us to know that we are being listened to worldwide, that we are enjoying popularity and support in Romania as well. It gives us that pleasant feeling that we do have a global audience on our side, and that we feel connected at an international level through music.
Alina Velea
Translated by Sînziana Mihalache
MA student, MTTLC, Bucharest University
Return to archived Interviews