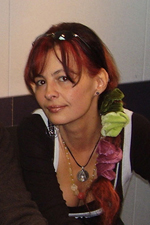 Director Josef Třeštík has as guest composer Irinel Anghel; who provided us with details about the production and content of these programmes:

This project was launched by the RCI in Prague, on the occasion of the National Day of Romania celebration in December. Several cultural activities were organised in Prague, amongst which also this series of programmes dedicated to the Romanian Music. I was invited to offer the necessary theoretical and musical information to director Josef Třeštík at Radio Prague and thus these 7 programmes were created. They are very lively and interesting, the discussion was challenging for me and highlighted many aspects that are worth being known in practice by international press, organisers and artist. I think the result is an obvious advantage for the Romanian music and culture.

Could you showcase the content of the programme in few words for us?

We have observed the evolution of the Romanian musical school from its beginning, from George Enescu to the present, reviewing the contributions of each generation of Romanian composers, either those who continued the line of George Enescu, or those who synchronise with the Western avant-garde, and the original aesthetics and ideas of the area. We have observed both generation profiles, and individual composition profiles, thus alternating a theoretic perspective with a more detailed, analytical one, at the level of close microscopic scrutiny of the creation of a composer or another. We have observed the Golden Generation of the Romanian music - Ştefan Niculescu, Aurel Stroe, Tiberiu Olah, Anatol Vieru - and passed to composers renown in the second half of the 20th century due to aesthetics contributions related to their names, due to their original contributions - Octavian Nemescu, Corneliu Dan Georgescu, Iancu Dumitrescu, Horaţiu Rădulescu. I availed of my direct contact with the stage, and my up-to-date knowledge on the current Romanian Music environment to outline an image of the present music situation in Romania.