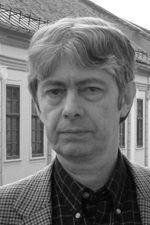 From February 7th to February 11th, 2011, the thirteenth edition of the "Gheorghe Dima" Music Contest is held in Cluj-Napoca after thirteen years since its last edition. The contest organized by the "Gheorghe Dima" Music Academy, is held in 2011 on two sections - flute and clarinet - and it is meant to be, starting this year, an internationally recognized event, a goal that can already be considered achieved due to the large number of foreign musicians enrolled and due to the participation in the panel of judges of personalities from the world of musical interpretation.

I have learned more information on the International Competition of Musical Interpretation held in Cluj-Napoca during this period, in an interview with Prof. Dr. Adrian Pop, Rector of the "Gheorghe Dima" Music Academy.

«This issue is what we could call in English a" revival "- the rejuvenation of the "Gheorghe Dima "contest. Our Music Academy established this competition in 1984, in a very dark and heavy era. Since then it has become a guiding light and a goal for young musicians. There are many prominent Romanian performers of musical interpretational performing arts: playing, singing, chamber music ensembles, conductors - because these were sections which, by turns, the contest 'Gheorghe Dima" focused on - performers who started their earlier careers thanks to this contest. In the 90s we had difficulties in continuing this contest, and now I have decided to revive the tradition, on the basis of an initiative extremely well set up by a very enthusiastic group of young and highly valued people in our institution, led by clarinet player Razvan Poptean and I have reserved my right to require that this international competition be a clarinet and flute contest that represents a moment that resumes all the "Gheorghe Dima" contests.

It is a revival of tradition because we consider it more valuable to cultivate trees with deeper roots than to annually grow different plants. Everything happening at this moment is totally amazing to me because I would not have expected the scale of this competition to reach what the opening day promised it to be. There are a total of 133 registered competitors, and the list covers world geography. The international jury is "clear" fame, as the Italians say, with Pierre-Yves Artaud, and János Bálint for flute, with Philippe Cuper for clarinet, who are absolutely outstanding personalities in the field, recognized worldwide. The contest features awards, represented in particular by musical instruments offered by various companies. It is a competition that surprises us, or at least me, due to its success, I am very glad and I am sure it will be successful.»