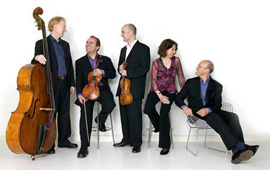 The Schubert Ensemble of London and Enescu's music

During the period from November 2010 to March 2011, the Londoner quintet The Schubert Ensemble presents, in England, a series of concerts entitled Focus on Enescu. Among these concerts, three are housed by the prestigious Wigmore Hall. The most recent one took place on the 7th of February. Two days after that recital, I had a talk with four members of The Schubert Ensemble.

In the opening of the interview - the pianist William Howard, the founder of the ensemble, about how he came into contact with Enescu's music:

'We have all known Enescu's music for some time now, personally I heard a violin sonata and the third piano sonata. We ourselves started to play his works when we were invited to Romania, five - six years ago, when we also learned the second piano quartet. We fell in love with the musical piece, we recognised what a great composer Enescu is and the idea to explore more of his chamber works came to us.'

Is this the reason why you wished to present the Enescu - Dvorak series at the Wigmore Hall, from last November until March?

Yes, because we realised that his music can wake the interest of people and that it is not played very often here, in Great Britain. After talking to several people, I noticed that they did not really know it and we thought that this series would be welcome. There are three concerts in which we present his important piano and string works.

What have you played up to this point?

The Schubert Ensemble's violinist, Simon Blendis, has talked with us about the audience's reaction to Enescu's music:

'We were delighted by the enthusiastic answer we received. I think that this is also due to the fact that his music is a novelty for the English audience. Before playing his works, we present them in a few words, trying to reach the particular parts that might seem unusual at such a first audition, or to talk about the special characteristics of the way in which Enescu writes. We discovered that this helps our audience understand the work, be more open to it. They came to us after the concerts and told us that they enjoyed a music that is very attractive sung live - because to listen to it live or on CD are two very different approaches. In a recording, one cannot detect certain aspects so easily, but when one sees the musicians create the respective music, everything is a lot more accentuated, it has a bigger impact.'

As a violinist, would you say that Enescu has a particular way to write for the violin?

He notes all that he wants the musicians to do most carefully and in detail. Especially in the violin and viola scores he gives us all the fingering, indicates the manner in which one has to use the bow, the free strings, the harmonics, the glides. I do not think that we would have done all these things if Enescu had not written them. It is almost as if he would instruct us to play the musical piece the way he himself would have done it, his scores are a type of historical documents to us. If we do exactly what Enescu tells us, his music sounds extremely pleasant.

Do you feel that Romanian music can be found in Enescu's music?

Yes, certainly. There are some very clear Romanian folk melodies, which sometimes appear in the middle of the music. Again, I think that Enescu's indications on the manner in which we have to play these passages make them be truly folkloristic, as if they would be played by a fiddler. A few years ago, I had the pleasure to interpret his string Octet in the company of an excellent Romanian violinist, Remus Azoiţei, at the first violin. I found that he was a very good musician - and a very good interpreter of Enescu in particular. For me, it was a lesson of how his music should be played, with that certain liberty of the popular instrument, with its virtuosity and brilliance. Playing with him was a fantastic experience.

From what you have interpreted until now, which aspect of Enescu's music do you think is more evident: this lode of traditional Romanian music or the modern, impressive, French quality?

I think that everything is merged in an extraordinary manner. It is difficult to separate these sections of his music. It sounds like 'Enescu' because it is composed of all these different elements, that is why it has a special and unique sonority.

You are presently recording the second piano quartet by Enescu.

Yes, indeed. We recorded the first one in December, both will appear on a compact-disc in July, I hope.

Which of Enescu's works do you have in your repertoire personally and as a member of The Schubert Ensemble?

The two piano quartets and the piano quintet are part of our repertoire, and I have played, as I was telling you, the Octet. They inspired me to know and listen to other of his works.

I asked the violinist Douglas Paterson, member of The Shubert Ensemble, to tell us why they named Enescu, on the band's internet page, 'one of the least played geniuses of the 20th century'.

'It is, of course, our opinion, but we guided ourselves by the opinions of other great musicians that considered Enescu a genius. Especially the cellist Pablo Casals said that, for him, Enescu was the greatest genius from Mozart to this day - this is a very strong opinion! Also, the composer Vincent d'Indy was talking about Enescu's incredible memory - if every one of Beethoven's scores would be destroyed, he said, Enescu could rewrite them altogether, from his memory. I was talking with an old Irish violinist, Hugh Maguire, who studied with Enescu, at Paris - from him I found out many wonderful stories: how Enescu would improvise piano backing for him, how he would always play Bach, his great love. It is thus a great experience, to know his music and to talk about it with other people. There are also contemporary composers that consider Enescu a disregarded genius - Oliver Knussen and Tom Ades appreciate him very much.'

How do you see the relation between the East-European exoticism and the occidental classicism of Enescu's music?

His music is composed of both - that is why it is so fascinating. I think that this piano quintet that we are presently rehearsing is closer to the French tradition, but it goes beyond the French music's experimentalism, from what I know. On the other hand, the first piano quartet features the music from the Austrian part of Europe more - Mahler, Richard Strauss, but also French influences from Ernest Chausson, for exemple, all with the atmosphere of Romanian music in the background.

We also asked the cellist Jane Salmon what she finds attractive in Enescu's music.

'I think that its savour is extraordinary, given by the fusion of stylistic elements, but also the fact that it is music written by an expert; he was an excellent violinist and pianist, and this can be seen in the attentive and competent manner in which he composed - everything is very clear, one can precisely understand his intentions.'

The violinist Simon Blendis remarqued the fact that Enescu gives all the indications for technical interpretation in the scores for his instrument. Does he do the same for the cello too?

Yes, the same. I also noticed this in the musical piece that we are presently rehearsing and recording - the second piano quartet. Enescu writes down everything, including the string on which one is supposed to play. I find it very useful, because when one has to play a glide, it is good to know on which string one should start. He uses many harmonies - unlike other composers that ask for such a thing, but it is not possible, Enescu knows what he asks for.

So you do not feel tight-laced by the amount of indications!

Strangely, no! We were actually discussing this aspect too - the initial reaction when one sees all this is that Enescu is obsessed with control! But I do not feel this way. After the recital from Wigmore Hall from the beginning of February, we were saying that all his indications offer us, paradoxically, a great liberty, after all, because they guide one to that extraordinary musical language of his. Not always do the permanent indications have the same effect - but in his case, yes, they guide you through music.