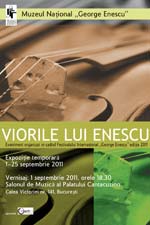 Enescu's Violins, Once ore in the Public's Attention

Where does the story of Enescu's violins begin?

In 1956, a year after George Enescu had left this world, all of his personal belongings, all of the instruments he possessed up to that moment, all of the manuscripts, photographs and correspondence were handed over to the 'George Enescu' National Museum - the Enescu Museum at the time - by his wife, Princes Maria Cantacuzino-Enescu. These instruments, found in the institution's patrimony, were not presented to the public for over fifty years. They were maintained by the appreciated luthier Iosif Pollak, they were played for several decades by professor and violinist Nicolae Bilciurescu, in order to have their quality maintained, therefore the violins were kept in good state.

In 2007 we wanted more though: we wanted to give an appreciated Romanian violinist the possibility to play on the most precious of the violins found today in the Museum's patrimony, the Guarnieri violin, which bears the manufacturing year 1731, entitled 'The Cathedral'. As a result of the 2007 contest, Gabriel Croitoru plays this instrument publicly. Beside the Guarnieri, the 'George Enescu' National Museum also possesses two Paul Kaul violins - one made especially for George Enescu, cut to the size of his hand, a tad bigger than usual. Also, a Silvestre violin and a Gaspar da Saló copy violin. These five instruments await their visitors starting Thursday, September 1st. The exhibition is open in the Music Room at the 'George Enescu' National Museum on Calea Victoriei no 141, between 10:00 a.m. and 17:00 p.m., throughout the time frame of the 'George Enescu' International Festival.

What other projects does the 'George Enescu' National Museum have during the festival?

We're trying to be as attractive as possible, as present as possible, to hold as many events as possible at our headquarters, as well as at the headquarters of our partners. For instance, Saturday, September 3rd, 11:00 a.m., we're holding an exhibition; painter Dumitru Bâşcu's exhibition, who is George Enescu's brother. There was little talk about this important artist and we're waiting for you to discover an amazing artist in this not very well known brother of George Enescu.

Also, next week, in the context of the 'George Enescu' International Symposium and of the second meeting of the 'George Enescu' Societies throughout the world, we're preparing a few more events: a book launch - the 2009 Symposium volume, on September 8th. Also on September 8th, at the Hungarian Republic's Cultural Centre, the exhibition 'Enescu and Bartok - 130' - a collaboration of the Museum with the Bartok Archives in Budapest. Then, two other book launches, Saturday, September 10th - the forth volume of documents from the archive of the 'George Enescu' National Museum and the republished volume signed by the late professor George Manoliu dedicated to Enescu' violin playing.

Then, on September 15th, at the National Opera House in Bucharest, on the premiere of a re-enactment with Oedipe, we will put on display the exhibition 'Oedipe - 75' and, also, we will launch a new piano reduction created for Enescu's masterpiece 'Oedipe' by pianist and composer Andrei Tănăsescu. At that time we will also launch Elena Zottoviceanu and Georgeta Băcioiu's album, dedicated to the correspondence that George Enescu held in view of the Paris premiere of his masterpiece. And, last but not least, another book launch, which we are preparing for September 23rd- a collaboration with 'Casa Radio' publishing house - the volume 'George Enescu - Un exil supravegheat', belonging to author Ladislau Csendes.