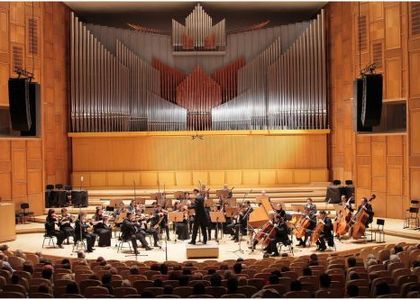 In Memoriam Ludovic Bács: Concert at the Romanian Radio Hall

Wednesday, 13 January 2016 , ora 10.21
On Wednesday, 13th January, 2016, at Romanian Radio Chamber Orchestra will take place the first concert of this year. The event is dedicated to the memory of conductor Ludovic Bács who deceased on 30th June, 2015. The audience will be able to see performing on the stage of the Romanian Radio Hall four of maestro Ludovic Bács former students, conductors: Marius Hristescu, Tiberiu Oprea, Radu Popa and Bogdan Vodă. The repertoire of the evening will feature also two compositions by Ludovic Bács alongside works by Bach, Mozart and Schubert. Bogdan Vodă, Marius Hristescu and Radu Popa have told us more about this concert.

How exactly were you influenced by maestro Bács's personality and what advice do you keep close to you before any rehearsal, any concert or before going on stage?

Bogdan Vodă: In my case the talk could begin as a model that is valid for many aspects of my life. If I said that I am married to the lady who plays the stringed instrument and I have two boys...I could say that I followed the model. Leaving this aside and wishing to have the same marvellous family life as the Bács showed me as a model, I can say that maestro Bács was a model for us in everything. He was an example of morality, of what means being ethical before being a musical model. As Radu have just said, he was a musical model whom we follow thoroughly in the hope of producing vibrant music and respecting the place where we come from. From my point of view I have also noticed the need to offer others the chance to progress, to be seen, to be given the same chance as maestro Bács had given me when I was a student in my first year. He offered me the chance to conduct a symphonic concert and later, he found the means by which Radu could conduct at Radio Chamber Orchestra, my first symphonic work in a series of concerts where I could enjoy my role as a composer, which remained the principal one in my case. In my career as a conductor I have sought to promote young students as our maestro did. I think it is impossible to recount everything in a single interview but what we can tell is that we have been all impressed by his way of regarding the music in detail, in analysis, in hierarchy, in everything related to the aspects of musical thinking which should not be forgot. I think we owe him all these immense clarifications. There is much to say, we could write a doctoral thesis on it.

Marius Hristescu: I was a younger student than my colleagues when I entered maestro Bács's class thanks to Radu. I was also a student at the Faculty of Composition. We have all three something in common: we entered maestro Bács's class because we wanted to conduct. I liked seeing my older colleagues on stage and I was thinking then why shouldn't I do the same thing? Radu encouraged me and introduced me to maestro Bács. I remember when I was in my second year of my Composition studies and Radu introduced me to maestro Bács. Verona Maier was playing the piano, I think she was the one playing piano at four hands at once when maestro Bács suddenly asked me: 'Do you want to conduct?'. It was Symphony No.4 by Beethoven, I do not know what they were doing then, I just said 'Yes'. I tried to conduct when the maestro said: 'Stop!'. Everyone stopped. Then he asked me: 'what chord is this?'. I looked at him fearfully, I did not know where I was, what musical phrase, what performance, I did not know what I had there...but this was a thing which touched me greatly because I realized that on any given moment, when you are on stage, when you study a score, when you work , in rehearsals, you have to know where you musically are, you have to know where you started and where you go, where you are and join all these aspects of the musical phrase in a way to make the concert spectacular. For me maestro Bács was a true maestro, a teacher from whom I learned many things. Besides our teacher-student relation he also impressed me with his life style, the way he handled everything starting with music and backwards.

You are conducting now, on this concert, the ensemble which he has been supervising for many years. Can you feel his imprint even now?

Bogdan Vodă: I, personally, have some strong memories: the moments when we were going to rehearsals, when I had the chance to conduct this ensemble. To be honest, a lot of things have changed. There is something, probably, which remained but I wish we could go back in time and resurrect maestro's period at the Chamber Orchestra.

Marius Hristescu: Yes, there are many things which remain because the imprint of a great maestro cannot be erased. The thing is that when new generations come, as happened with other maestros and big ensembles, I am thinking of the Madrigal Choir, the orchestra or choir remains of a certain level and certainly preserves what has impressed it most while working with the great maestro it had.

Radu Popa: Nowadays people and generations have changed. Young students have come and more will come. I, contrary to my colleagues, will say that maestro Bács's spirit is to be found here through the ones who stayed and through the ones who still offer music in the Chamber Orchestra. This music imprint which maestro Bács conferred to this ensemble is vividly preserved. We want the young ones to take and carry over this imprint for the understanding of this phenomenon. For example, in the Chamber Orchestra, most of the prompters are instrumentalists in the orchestra since the time when maestro Bács was alive and starting from a group as this one we can be reminded of the type I am referring to. If I return to your question 'what advice of maestro Bács do I remember?' I would say it is to not give up the seriousness of the rehearsals. These rehearsals are for finding the musical imprint, the identity of the ensemble. No matter how much it changed, Radio Chamber Orchestra will always carry the musical imprint of this maestro.

Radu Popa: For all those who knew him, for all those who did not know him and especially for those who loved him, we try with our performance or at least with my performance to express not myself but my maestro, because I am his product. If music lovers want to see and listen to another product of maestro Bács let them come to the concert or listen to it!

Bogdan Vodă: I agree with Radu Popa, my dear colleague. This is a thing which should be also mentioned because in music it is very hard to find something which we managed to preserve even at great distances: a group united. I think this is also the merit of the one who shepherded us. I invite music lovers to come to the concert! It includes a special programme, with a lot of various and beautiful works and, of course, with two works by maestro Bács in his role as a composer similar to the way some of us navigate between the two complementary areas. Come to listen to two magnificent works by maestro Bács alongside other works which are certainly worth to be listened to.

Marius Hristescu: I also agree with my colleagues and I invite everybody to the concert or listen to us on the radio. In addition to what Radu have said, I think this evening's applause will be well-deserved for maestro Bács.

t includes a special programme, with a lot of works nited. hard to find it in music but we managed to