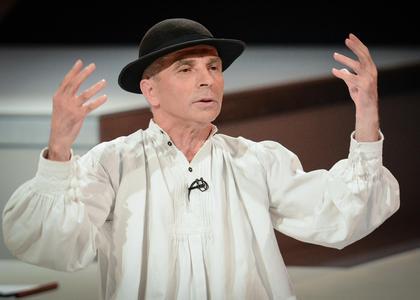 Monday, 18 January 2016 , ora 13.16
'La porţile ceriului' is the title of the performance of traditional music and poetry towards which it will be celebrated the National Culture Day on Friday, 15th of January, at 19.00, at the Romanian Athenaeum. The event that is organised by the Romanian Cultural Institute among with 'George Enescu' Philharmonic will present to the audience Grigore Leşe and his guests: Zamfira Muresan from Tara Lăpuşului, Maramureş, Mihai Moldovan from Idicel Valley, Mureş, the group of Aromanians from Cogealac, Constanţa, fiddlers from the South of Oltenia and a vocal-instrumental group from Maramureş Voievodal. The musical virtuosity demonstrations will alternate with the lyrical moments held by the actor Ion Grosu who will recite lyrics from Mihai Eminescu`s works.

Tomorrow you will perform at the Romanian Athenaeum in an event called 'La porţile ceriului'. What will the audience from the Great Hall of the Athenaeum listen to?

I want to mention that it is the most daring project that has ever been presented at the Romanian Athenaeum before. Why do I say that? Due to the fact that we will have on stage musicians, wanderers, storytellers from the rural, peasant communities. They will bring in the people`s attention the songs, farandoles, peasant proverbs that were unfortunately forgotten through the historical evolution. The farandoles and the peasant songs have been eclipsed by the entertainment music and hardly survived until nowadays. For an hour and a half the peasant songs will be highlighted by the presence of the painter Costin Petrescu. We will present the deep Romania, the music of the common sense, songs by his own, plurivocal and fiddler's songs. This space from the edge of the empires preserves a unique type of music: she is the one that fructifies the aesthetic values. The babel and the patriotic hues, the declamation, the whims and the trifles will not be present at the Athenaeum.

The cultural appearance of the Romanians may be included in the modern and democratic European cultural universe towards the new generation. Towards this concert I am addressing to the new generation. A powerful generation is coming; with gifted, extraordinary youths that have spread in the entire Europe at the universities, in America, Asia…I met with them at different concerts. This generation must get to the partials of social and psychological influence. Now, we need an international confirmation in order to know how we are, especially, how we think we are. For this we must have consistency with us and not with the world. We need love for the truth! The concert from the Romanian Athenaeum is giving us a signal.

How do you consider that the music you talked about earlier is combining with Eminescu`s lyrics?

I have chosen poems that belong to the traditional lyric. The poems are combining very well with the fiddler's songs, they are speaking about everlastingness, about our philosophy, about, and the way of living…it is combining very well with the songs of the wedding ritual with the songs of the birth, funeral ritual. I did not choose the poems randomly. They must be promoted because this past…as Eminescu also said 'have a great past, a great future'. God, please make our future a bright one, with the help of these generations.