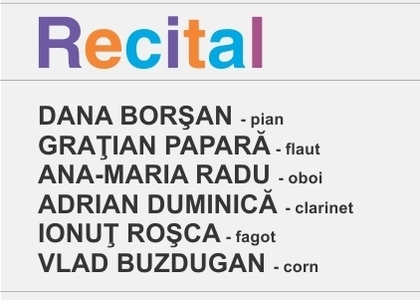 A Recital by Dana Borşan and National Radio Orchestra Musicians

You have come up with yet another recital with an unexpected formula - piano and five wind instruments - a recurring arrangement in the Radio Orchestras and Choirs Season. Dana Borşan, what are your thoughts on the evolution of this collaboration?

I confess I like to play in unexpected formulas and I believe that only by frequently presenting accessible repertoires to the public - we have given much thought on this matter - chamber music will gradually become more palatable to the public. However, I think that this endeavor will take time, maybe years, and it will require the contribution of many other artists.

Yes, we hope that the sonorities of the piano will blend harmoniously with the wind quintet. Indeed, this is not our first project of this sort. On past occasions, the pianist Dana Borşan, our friend, if she will allow me, has helped us in bringing such programs before the public. Our hope is that people will come in great numbers for tonight's event at the concert hall.

We will interpret works that are quite new for the musical stage - a quintet with piano by Korsakov, which, as a side note, was written by the composer at a young age, but published posthumously. He participated in a musical composition competition with this piece, and Korsakov mentioned in his biography that he did not receive so much as an honorable mention and that the pianist buried it because he gave a poor interpretation. We are trying to bring out the wonderful sonorities of the score and to present them to the public as best we can and I hope that it will be well received.

We hope the audience will detect, particularly in Korsakov's quintet, certain seeds of his later work Scheherazade, the most representative of his compositions. In fact, aside from his most famous piece and very few others, Korsakov's works are rarely performed, and it is very likely that not many people have heard of this quintet by Korsakov. It is an engaging quintet, a challenge for us and we hope that the public will arrive to the same conclusion, which is why we look forward to the public's reaction, because their assessment is what ultimately matters. We have also included the Quintet by Beethoven, which is a masterpiece for this instrumental formula, and it gives us great pleasure to perform it tonight.

Graţian Papară: Aside from these two works, we also have other two for this instrumental arrangement: Peer Gynt Suite no. 1, the four movements without piano, only the wind quintet. We hope to achieve the original sonorities and to blend them in a way that will convey the emotion of the four movements we will be interpreting.

Vlad Buzdugan: This Peer Gynt suite was especially chosen for the public, because we know that the excerpts which we are about to perform are famous and people have heard them before, even without knowing what they are exactly. We wanted to try certain works in particular, but our hope is also that the public will enjoy it and more people will develop an interest in chamber music. Of course we have also included one of Mozart's piano sonatas, arranged for piano and wind instruments, because Mozart is timeless and his work will always be a challenge.

Dana Borşan: This is precisely what I was going to mention. A program such as this one requires a great deal of effort; it is not as easy as deciding to play something, because there are other variables to consider. At first we wanted a repertoire of French music, which would have been very interesting and difficult, a challenge for us, but it might not have been as appealing for the public. We had lengthy discussions on the matter, but ultimately we decided to combine them… that is why there are transcriptions. That is also what Vlad was trying to say: there are transcriptions because we hope that names like Mozart and Grieg will attract people. We could have chosen works that are not transcriptions, but there is a balance to be maintained between the novel additions - Korsakov - and Korsakov should indeed appeal to the public; when people see Korsakov in the program, they automatically think of Scheherazade - and the more approachable ones, with a strong impact on the audience.

Graţian Papară: Basically, it is a combination between the Classical and the Romantic. This is what our recital will be.