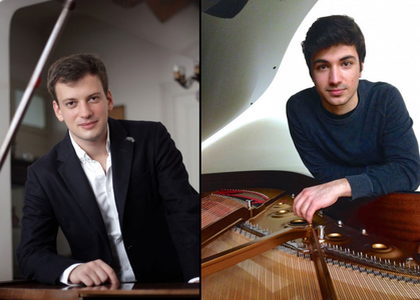 Tuesday, 2 February 2016 , ora 9.49
This year's season of the "Enescu Concerts" series, organized annually since 2007 by the Romanian Cultural Institute in London and the Enescu Society in Great Britain, opens on Thursday the 4th of February with a recital by pianists Mihai Ritivoiu and Evgheni Ghenciev. The programme shall include pieces composed by Bach, Chopin and Liszt, as well as the composer after which the series is named, George Enescu. Pianist Mihai Ritivoiu talks about his experiences with the audience in London.

You will be performing in the first 2016 performance of the "Enescu Concerts" series, organized by the Romanian Cultural Institute in London and the Enescu Society in Great Britain. What will be the programme for the recital you will be part of on Thursday?

How did your collaboration with Evgheni Ghenciev start?

We are both studying in the same program - Artist Diploma - at Guildhall School. In addition, we are both members of The Keyboard Charitable Trust, and this concert is a collaboration between the Romanian Cultural Institute and the Keyboard Trust - an organization that promotes selected young pianists. It was the Keyboard Trust who selected us when the Institute asked them for two pianists, which was a wonderful occasion for us to work together. I am of course very glad for this collaboration with Evgheni.

What are your plans for the near future and when will we be able to see you on a Romanian stage?