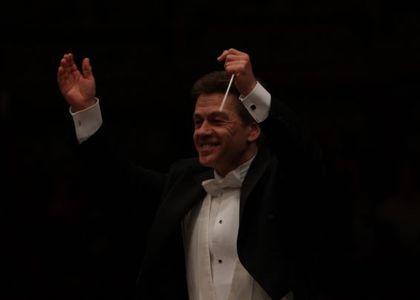 Christian Badea returns to the desk of the 'George Enescu' Philharmonic Symphonic Orchestra from Bucharest on Thursday, 11th of February and Friday, 12th of February 2016, for two more concerts of the season 2015-2016. Regarding the programme of these performances, the conductor Christian Badea said:

You return to conduct this assembly for the second time in a row; this time it is with a Robert Schumann dedicated programme. Why have you chosen the music of this composer?

The music…first of all, because it is an exceptionally beautiful and important music. He is probably the most important German romantic composer and unfortunately, he is not so often played as he should be. And after last week when we had a programme a bit like a mosaic, but which the audience liked very much (with Tchaikovsky, Liszt and Mozart), we thought to create a unitary programme through the music of Schumann and also in the same style. Therefore, we decided to perform the Manfred Overture (a sort of tone poem) and The Symphony No. 3 Rhenish, which is probably Schumann's most optimistic symphony from the series of four symphonies. We have a guest, an extremely talented German cellist, Gabriel Schwabe, for the cello concert. I haven't had the chance to work with him yet, this is the first time we meet, but I know about him as a musician and I heard him play. I believe it's going to be a very pleasant experience.

I have been coming to the Philharmonic Orchestra for a long time and we've reached a point where we know each other very well, we know where should we work more, we know which are the spots where each one has to solve their problems because the time is short; we only have three rehearsals. Therefore, we're talking about a collaboration which has given extraordinary results many times; for example last year in the third act of Parsifal, or this season when we performed Elgar's Symphony No. 2 which is very hard and it isn't usually played, but it turned out really well, and also last week (especially on Friday night) I enjoyed the way the Orchestra played Tchaikovsky's Serenade, which is not so easy to perform.

How does your schedule look after these two concerts, on Thursday and Friday?

I came from Copenhagen and I'm heading straight to Sydney, where I have a performance at the Sydney Opera House, and then I am leaving for the United States. I will return here around Easter for two weeks full of concerts and then I'm going to Budapest. This is my schedule for the next two or three months.