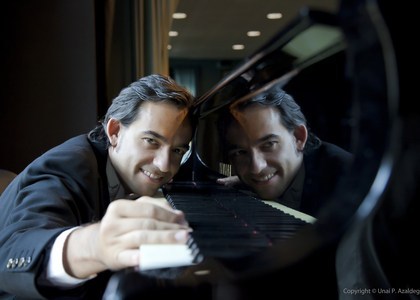 The Pianist Josu Okiñena on the Stage of Radio Hall

Friday, 19 February 2016 , ora 12.35
The concert of the National Radio Orchestra on Friday, 19th February 2016, will be under the emblem of Spain! The soloist will be the Spanish pianist Josu Okiñena known to the Romanian public thanks to Do you like Brahms ? National Tournament, when he was invited by the cellist Răzvan Suma to perform. He will perform Nights in Spanish Gardens by Manuel de Falla. The programme of the concert conducted by Nicolae Moldoveanu will be completed by Emmanuel Chabrier`s Espana rhapsody and Ludwig van Beethoven`s Symphony No. 5 in C minor. The soloist of the Radio`s great symphonic ensemble has spoken about his presence in the Mihail Jora Studio.

Your connection with Romania started during the collaboration with Răzvan Suma. How this musical dialogue start?

It was a miracle. It`s been twelve years since we`ve started this collaboration. We`ve met in Spain, he was there for a competition and I watched it`s development. I listened him and I felt very close to his style. We`ve decided to begin this collaboration and in the first year we performed more than thirty concerts, lots of them in Spain and America. We created a bond but also a great friendship.

In the last period there were a lot of concerts in the halls our country. What do you think of the Romanian audience?

The audience is very different here compared with the one in Spain. I`m impressed by its quality and the musical knowledge that the audience has. Musical life here is elaborated and there are a lot of professional musicians in Romania and that`s great.

This is your first collaboration with the National Radio Orchestra. How was the meeting with them and its conductor, Nicolae Moldoveanu?

The orchestra is fantastic and the conductor is very good, very precise. I chose to perform with them because I am very attached to this music. I`ve performed it many times, I simply adore de Falla`s music. It`s mainly Spanish folklore but it`s written in a universal language used at that time. The orchestration can be compared with Ravel`s or of any other great composer of that time, that`s why de Falla is one of the great composers of that period. Nights in Spanish Gardens will be performed for the first time in Romania. I am glad that I can transmit the music of my country, this is also one of my wishes, to popularize Spanish music and it`s quite appropriate for this programme. It makes me think of the Spanish gardens- sounds, colours and warm atmosphere. This music makes you dream about those places.