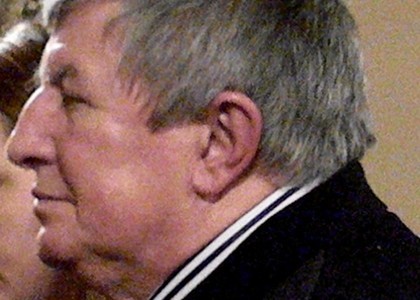 Interview with the composer Nicolae Coman

Maestro Nicolae Coman, first of all I want to say you Happy Anniversary! You are in an important anniversary year. I know you work very hard, you compose a lot and your works will be able to be heard on Monday, 28th of March, at the Assembly Hall of Cantacuzino Palace in a concert organized by the Union of the Composers and Musicologists in Romania. The poster of the concert shows us that we will attend to a recital of music and poetry. Which will be the works that will be presented to the audience?

There will be lieders, piano pieces with reciter and Jazz Improvisation on theme of my series, Seasons. Among lieders there is a first audition. I have many lieders like this that hasn't yet had an absolute first audition. They will be interpreted on the lyrics of Rimbaud, Goethe and Mariana Dumitrescu by the couple Bianca and Remus Manoleanu. Then, there will be lieders interpreted on the lyrics of Ioanna Tsatsos and Guillaume Appollinaire by Claudia Codreanu and Diana Voda Nuteanu. Then, as it fallows, the Sea Shadow, six songs with lyrics written by Miquel Marti performed by Alina Bottez together with Lavinia Coman at the piano. There will also be piano and reciters songs from a series of 41 songs - the Seasons - and five reveries performed by Ema Profirescu - Geamanu and her husband, the actor Silviu Geamanu. Then, there will be the improvisations from themes of piano plays with Nicolas Simion at the saxophone accompanied by Sorin Romanescu at guitar.

At the previous shows that I attended, you had often presented lieders, therefore this link between music and poetry is a passion of yours. You had also been included in the top of 10 Romanian composers of lieders. Who are the poets that you had been most attracted by along the time?

It was an entire series of poets…Besides that, I wrote lieders in six languages. In this concert they will be singed in the original languages: French, German, and Catalan preserving the Romanian character of music.

Can you reveal us what are the modalities, in your opinion, used by a nowadays composers to managed to touch the souls and preferences of the audience?

A modality can be the broadcasting of lieders side by side with the light music. I also wrote light music, around 30 songs. This is a way for the lieder to touch the soul of the audience.

And the musical language used?

It is about adequacy of a music with a poetical idea.