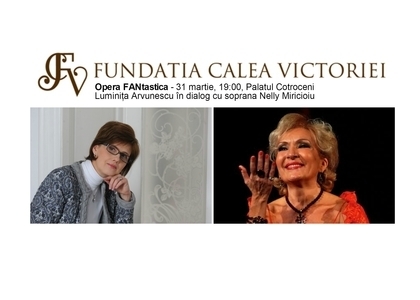 A Dialogue about the Project 'Opera FANtastica' with Sandra Ecobescu

"Opera FANtastica", the series of conferences dedicated to opera lovers, will begin on Thursday, March 31st, 2016, and will be moderated by Radio Romania Music host, Luminiţa Arvunescu. The first program brings you the famous British soprano of Romanian origin, Nelly Miricioiu, as protagonist. We obtained further details on the entire project from Sandra Ecobescu, president of the Calea Victoriei Foundation.

Today, March 31st, 2016, the first of the series of events organized by the Calea Victoriei Foundation will take place at the National Cotroceni Museum -- Opera FANtastica. How did this project come about?

It started with a meeting that I had with Luminiţa Arvunescu - radio host at Radio Romania Music, and is, in fact, a project for showcasing celebrities of the opera world - both male and female voices - and their stories, the first guest being Nelly Miricioiu, whose story is very special, as you all know.

This project brings something new. Aside from the musical aspect, which will also be present - those who will attend tonight's event at the Cotroceni Palace will have the opportunity to enjoy several arias performed by the great soprano Nelly Miricioiu - aside from this exquisite musical intro, long awaited by the public, the dialogue between Luminiţa Arvunescu and Nelly Miricioiu will touch upon several subjects. Naturally, biographical details will also be included in the discussion, but the main subject will be the musical side and what it means to have a musical career, what are the challenges, what it was like to be away from Romania, what were the greatest and also the latest professional achievements of Nelly Miricioiu, and the special relationship she has with her country of origin.

From the presentation of the project we learned that each event will take place in a different setting, as is best suited for the guests and the theme of the event. What was the reason for choosing the National Cotroceni Museum for this first event and also what are the other locations which `opera-fans` can expect to see being used for the following events?

It was Luminiţa Arvunescu's wish that the event should have a setting that is truly special, also keeping in mind soprano Nelly Miricioiu's relationship with the royal family. The following events will most likely be held in other patrimony buildings, such as the Palace of the National Military Circle, or the Odeon Theatre. We are also considering changing the settings because it would be a wonderful opportunity for the public to rediscover the numerous interesting locations of Bucharest.

Finally, what are your expectations with regard to this project?

My expectations are that there will be communication between the soloists whom Luminiţa Arvunescu will have as guests and the public. This is one of the goals of the Calea Victoriei Foundation, namely to bring models of humanity and professionalism closer to the public. Also, during events such as the ones of the Opera FANtastica series, I wish to see barriers disappearing for a few hours and a genuine dialogue taking place.