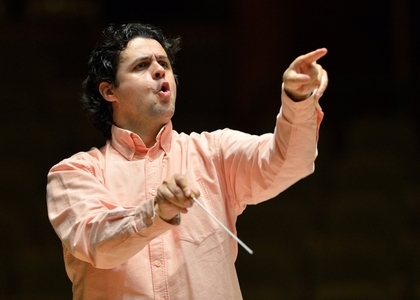 Cristian Oroşanu - the conductor of the National Radio Orchestra

On Friday, 8th of April, Cristian Oroșanu will conduct the National Radio Orchestra in a classico-romantic Austrian-French programme. There will be performances of Concert no. 20 KV 466 for piano and for orchestra, by Wolfganf Amadeus Mozart in the re minor register and, after the break, a performance of the masterpiece of Hector Belinoz - the Fantastic Symphony op. 14. The main soloist of the night will be the piano player, Horia Mihail, this concert being part of the "Pianul Călător" tour. Cristian Oroșanu, the conductor has sat down with us for an interview about this new apparition on the stage of the Radio Hall.

How is the colaboration with Horia Mihail developing?

Fist of all, Horia Mihail is a friend and an artist with whom I have colaborated on numerous ocasions and we get along vey well, not only in particular, but on the stage also. He is a very precious artist.

We are chosing the Mozart concert instead of that of Chopin, because Horia has a little problem with his hand, and unfortunately, we have to play something that will not require too much use of his poignet, but anyway, the re minor Concert by Mozart is a masterpiece which we played together before, I think ; I do not remember very well. However, I match very well with Horia on classic repertoire - everything that is Mozart, Beethoven, Haydn.

You chose the Fantastic Symphony for the second part of the show. Why?

The Fantastic Symphony by Berlioz is one of the piesces that I appreciate and care a lot about and the Radio National Orchestra is a band that I love very much and with which I intended to do this symphony from a long time ago. I think I must have mentioned this before, but from other points of view, conjuctures, it was not possible. But, look now, we succeded in creating this symphony with my colleagues from the Radio National Orcherstra and I am very glad about this. I heard that the hall is going to be full, the symphony turned out very well and I am pretty sure that we are going to have a wonderful moment tonight.

What follows after the stage appearance at the Radio Hall?

Next week I have an opera show in Iași, with "The Barber of Sevilla", and on the same week, I also have a symphonic concert with the philharmonic orchestra from Iași. The week after, on 20th of April, I will close the season at Brasov, with Kamerata Kronstadt, this band which I have created in January 2014 and who is starting to improve. I am very glad that I can guide these young musicians - not all of them are necessarily young, but as far as the work atmosphere is concerned, they are. Is a band which I am proud of and with which I finish my third season. We have dedicated this concert to the Easter Holiday; we will perform "Cele şapte cuvinte ale Mântuitorului pe cruce" by Haydn, and in the second part of the show - "Stabat Mater" by Pergolesi. We invited the soprano singer, Ana Donose from Iași and the mezzosoprano singer, Carmen Topciu from Brasov. This is an event which I can relate to. There is going to be a dramatic moment that I do not want to reveal to the public yet. Anyway, what I can say is that the verses from the Bible regarding the seven words of the Lord, are going to be read by me, before each part written by Haydn. I invite the people from Brașov, but not only - because I noticed that we have spectators who mainly come in Brașov, but also from other parts of the country and this makes me very happy - I invite them at our last concert, the season closing concert, the Easter Concert, on 20th of April, at 7 pm, at Patria Hall.