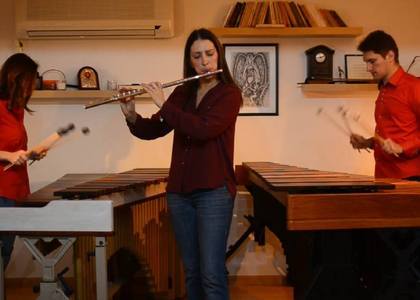 Interview with Alexandru Anastasiu about the Power Viber -Azul Tour

Thursday, 21 April 2016 , ora 10.10
On Saturday, 23th of April 2016, will take place the first recital with the ocassion of "the Power Vibes - Azul" tour which will be held by the percussion player, Alexandru Anastasiu alongside flutist player, Ioana Turcu and marimba player, Irina Rădulescu. The three artists define the project as being "a harmonious and a rhythmic show, an explosion of dynamism and energy". Alexandru Anastasiu spoke about "Power Vibes - Azul" show during the "Interview of the day" column.

After two festivals devoted to percussion music, now you propose a new project to the public, that is Power Vibes - Azul. Where is the debut of this tour going to take place?

This tour will take place at Râșnov, at Piața Unirii, during the Rosenau Cross Beats event which takes place every two years, an event which has percussion as its main focuss. We will play next at "Paul Constantinescu" Harmonium from Ploiești, so that, afterwards, we can, of course, come to the Radio Hall - a concert awaited by everybody - and we will close the show on the 7th and 8th of May at Sibiu and Cisnădie.

What kind of music will this tour render and who will be performing together with you on stage?

I will start by introducing my colleagues: Ioana Turcu - flutist (who is also my sister), Irina Rădulescu - marimba and there will also be our colleagues, the percussion players, who will help us with the last song from the programme, Tendresa, that is Alexandru Sturzu, Gabriel Barani and Andreea Vătui. Is a diverse programme, which features melodies which leads us towards movies' soundtracks. It is about Nathan Daughtrey's "Azul", the song that gives the title of our album, which we will be releasing on this special ocassion. Also, there is the song of Emmanuel Séjourné, Sigismun Toduţă - Sonata for flute and piano, adapted for vibes and marimba, and moreover, there are solos like "Lullaby for Evelin" of David Edgar Brown, which will be performed by Irina or Sigfrid Karg-Elert's Chaconne Caprice, which will be sang by Ioana, as well as my solo part which I composed mysefl - "Neverending story". As I said, we will close with Tendresa, a song written by Salvador Jesus, by his nickname Chapi, a song which is very rhythmical and the three percussionist colleagues will also help us.

You mentioned a song that carries your signiture. What was your inspiration?

This composition actually suggests a merry-go-round of the deepest emotional feelings, an endless story of human soul that is in a continuous pursuit of fulfilment through essential love. I was a little too descriptive, but I tried to express these feelings through music and I think, in general, that this is the aim of every composer out there, to convey as much as possible through his music.

Lastly, I invite the listeners of Radio Romania to come to this event because it is truly special, not only through the meeting of the three instruments, but also through its approach and through the fact that it is printed for the first time by someone on a disk.