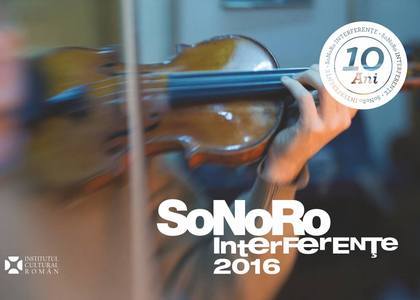 Interview with the violist Răzvan Popovici

Mihaela Martin at the violin, Răzvan Popovici at the viola, Frans Helmerson at the cello and and Diana Ketler at piano are the musicians who will be playing on Thursday, the 28th of April 2016, in the anniversary concert "10 years of SoNoRo Interferences" with 8 scholars involved in this programme. The violinist Răzvan Popovici had told us more about this meeting with the audience for our show "Interview of the day".

The anniversary concert "10 years of SoNoRo Interferences" takes place next week on Thursday, the 28th of April 2016, at the Music National University in Bucharest. What did you prepare for the audience?

As always, at the end of every SoNoRo Interferences workshop there are two concerts. Obviously, the main concert will be at the Conservatory in Bucharest- the one you mentioned- and the night before, at the Culture Port Cetate, on the Danube's shore- a first concert when we'll show to the audience the result of a week's hardwork. The repertoire is diverse. We'll play fragments from the Quartet with piano in g minor by Wolfgang Amadeus Mozart, the Sextet no. 1 by Johannes Brahms, the Trio with piano no.3 by Robert Schumann, the first Trio with piano by Felix Mendelssohn and, the little jewel of Franz Schubert, Trio in B-flat Major.

Beside the 8 interns of SoNoRo Interferences, I'm very thrilled that we have with us for the first time the violinist Mihaela Martin, the Swedish cellist Franz Helmersson, I will be playing at the viola and helped by Diana Ketler, the artistic manager of the SoNoRo Festival and a pianist from London, the concert will have all the right elements to be a successful one.

What can you tell us for now about this year's edition of the SoNoRo Festival ?

I can reveal to you the festival's title- I think you'll be the lucky person who will announce it for the first time. This year, we wanted it to be special, just like we accustomed our audience, the festival's motto will be "La Muse et le Poète" - therefore a repertoire connected very much to muses and poets. Obviously, literature will play the leading role. For the start, I think it's quite a good information..

We invite you at the concert on Thursday, the 28th of April 2016, 7:30 PM, at the Music National University in Bucharest, at an anniversary concert of SoNoRo Interferences when we'll be celebrating 10 years of existence with a lot of good music.