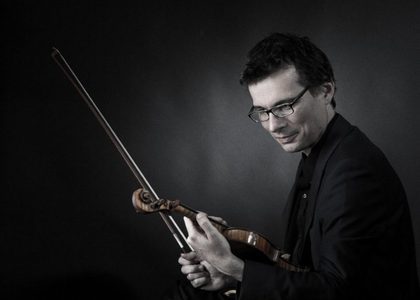 Interview with the violinist Alexandru Tomescu - the Experience 2.0

Starting with 7th of May, the violinist Alexandru Tomescu begins a new tour that has already become a traditional one for this period of the year.

You, together with the painter Ana Munteanu are preparing for the 2016 Stradivarius International Tour, but this time with an original concept. Tell us more about how begin this cooperation with the painter.

It is about the tour called Experience 2.0 and that is because last year, we have the Enescu Experience in which we proposed to the audience the entire work of George Enescu. This year I thought to move on - obviously, continuing with the music of 20th century, that one which is so lovely to me, but going up another step with something new. I talk about sand art, that type of art in which the painter creates some images using sand that are cast on a very wide screen. I followed Ana Munteanu at the Românii au talent, the Romanian show and I was impressed by what she was doing there and I thaught what if those things would happen in a live show during a classical music concert. This starts from the most people's question: Well, what do you have in mind when you sing?... let's say the Sonata by Bartok, that will also be in the programm. What it is in my mind will continue to be a mistery but the audience will have the occasion to found out what is in the mind of another artist, as creative as I am. There will be a light show in cathedrals. All the concerts will take place in cathedrals and will be with free entrence. Therefore, we thought to open a new door to the audience that loves the arts and music as well.

So, is there a link between the repertoire and the art that you have chosen to be aside?

Yes, doubtless. We are talking about some types of art that are specific to the modernity, specific to the 20th and 21st centuries. It is a very, very daring programm - the Soloist Violin Sonata by Bela Bartok, which, as much as I know, haven't been played in Romania, then the Soloist Violin Sonata by Prokofiev, and in the end the last but not least, Vasile Filip - one of the favourite students of George Enescu - with the Romaian Suite. I want to take a deeper view over the source of inpiration of the most of the 20th century's composers - the folklore. All the concerts will be in cathedrals; this very special sonority which is full of the spiritual energies of these places will make the violin to have a special vibration.

The tour was announced to be an international one, although until now all I have seen are only the concerts' days in Romania. Do you prepare any surprise to us?

Yes. In every tour there are many surprises. Indeed. During this month, there will be a series of concerts in Romania and starting with June there will be several concerts in Europe and Israel. The schedule will be announced at the right time.

I saw that, this time, the tour will have a well-established purpose, a philanthropic one. Tell us more about it.

Yes, it is true. It is for a social cause, it is a cause with an educative aim. I have clearly understood that we all have to take care of the Romania's future and I thought that the education is the answer of many questions. Last year we raise money to save and renovate the George Enescu's house from Mihaileni, Botosani. This year the challenge is more complex. We want to transform, to metamorphose that place. We want to transform the possible memorial house into a place of arts, in an animated place where many youngers from around and not only - maybe from abroad - to have access to the culture and beauty. We hope that the George Enescu Music and Visual Arts Academy in Mihaileni will become functional this year. We have already planned many events - masterclass, summer workshops for theatre and music - and, with the help of the audience, we hope that these beautiful ideas come true.