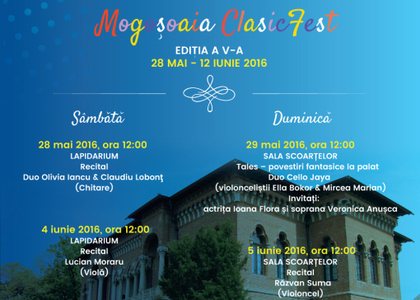 Tuesday, 24 May 2016 , ora 10.11
Saturday and Sunday, on the 28th of May 2016, there will be the first events during the 5th edition of Mogoşoaia ClasicFest, taking place at the Palatul Brâncovenesc in Mogoşoaia and being organized by the Bucharest Townhall thanks to the Palatele Brâncoveneşti Cultural Center and the Pro Valores Cultural Association. Sebastian Crăciun, the organizer, gaves us more details:

This year, Mogoşoaia Clasic Fest from Palatul Brâncovenesc in Mogoşoaia is at its 5th edition, a more special edition because, besides the regular music performances, there will be two photography expositions: Musical snapshots/ Instantanee muzicale by the students of Icon Arts Academy and Four seasons with Răzvan Suma/ Patru anotimpuri cu Răzvan Suma by Adrian Stoicoviciu şi Cristian Preda. Also, there will be presented CDs of our protagonists. There will be 6 shows during 3 weekends, in a place filled with history and beauty such as the Mogoşoaia Palace. All concerts will take place in Scoarţelor room and the music guests are the guitar duo Olivia Iancu-Claudiu Lobonţ, Duo Cello Jaya composed of the cellists Ella Bokor şi Mircea Marian who will perform with the actress Ioana Flora and the soprano Veronica Anuşca. There will be solo performances by the violinist Lucian Moraru and the cellist Răzvan Suma. The vibraphonist Alexandru Anastasiu will improvise on classic themes and the last recital will be by the soprano Irina Baianţ and the pianist Andreiana Roşca. Irina Baianţ who recently played pop songs or musicals, this time she is playing a French and Russian lied.

At the beginning, Olivia Iancu and Claudiu Lobonţ, the guitar duo, will have a repertoire composed of William Byrd, Mauro Giuliani, Handel and Piazzolla. In the second day, with Duo Cello Jaya, the actress Ioana Flora and the soprano Veronica Anuşca will show us something different, a new form of show meant to make the audience to come closer to the untold sonority of the cello. Music by Barriere, Sebastian Lee, Camille Saint-Saens, Popper or Diana Gheorghiu will be combined by the actress Ioana Flora, this year's winner of the Gopo Award for Best actress in the leading role, with texts by Napoleon, Victor Hugo, Kafka, Baudelaire or Ioan Flora. After the concert, there will be the presentation of the CD entitled Tales of Duo Cello Jaya, the first of the before-mentioned band.

Therefore, between 28.05-12.06, don't miss six visual, sonorant, musical events at the Mogoşoaia Palace. All concerts in all three weekends will start at 12:00.