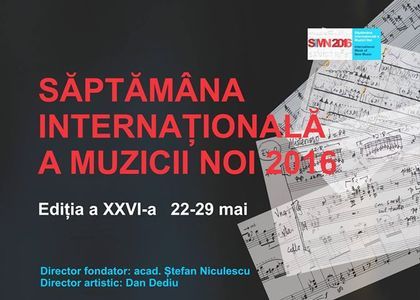 Limits... and Beyond! - the Theme of the International Week of New Music 2016

I thought that such a renowned contemporary music festival as this one entitled International Week of New Music founded by the academic Ştefan Niculescu in 1991, with the help of the Composers and Musicians Union of Romania, Ministry of Culture of Romania and other media partners and that of a very important coorganizer Radio Romania... I thought this festival - after twenty five years, at its 26th edition, must have a contemporaneous format, rooted in the 21st century and nowadays society. Therefore I found this central concept of limits and beyond because this is what contemporary music does: it tries to push the limits of history, nature, of the self and even of culture. Then, the idea of organizing this festival with four thematic directions came into my mind and all I did was to give them a famous name. There are themes and concerts that take place under the aegis of several famous names. The first is Ulysses - Beyond Tradition, the second Gulliver - Beyond Culture, the third Nirvana - Beyond Self, and the last Matrix - Beyond Nature, the electronic, experimental and other prolongations. I explained these things in the festival's booklet and also on the festival's official internet page. Whoever is interested in more information may visit the page simn2016 on Facebook or access the Composers and Musicians Union of Romania's internet page.

Sunday, 22nd May, takes place the first concert. What have you got scheduled for the first day of the festival?

It is a very important concert performed by three great musicians of contemporary music - flautist Matthias Ziegler, harpist Xenia Schindler and violinist Marius Ungureanu. All three of them are great promoters of contemporary music. It's an unusual trio because we have a flute, a harp and a viola that will perform together a work by the Japanese maestro Toru Takemitsu, a work by the Swiss composer Alfred Zimmerlin and my Trio op. 87 which we dedicated to them some time ago and which has never been played in Romania before. It is a start, I would say, that will take place on different coordinates. There will be symphonic concerts, an opera concert and conferences held by well-known American musicologists who came along with New Europe College Bucharest - the Institute for Advanced Study. Then, we scheduled a symposium dedicated in memory of three great musicians who served the contemporary music: composer Anatol Vieru, conductor and professor Dorel Paşcu and musicologist and etnomusicologist Cristina Rădulescu-Paşcu. We will also have the two Radio Orchestras, the Romanian Radio Choir, performing a masterpiece of the Romanian music after thirty years, Symphony No. 5 by Anatol Vieru on the lines by Mihai Eminescu. There is also a choral concert - Madrigal Choir at Athenaeum and George Enescu Philharmonic Orchestra will perform an interesting programme that includes Symphony No 3 by Enescu. A lot of first auditions are also included in the programme.

I invite you to listen to an audio adventure, an adventure worth of the 21st century! The music is interesting, you will enjoy it, it is performed by great artists from the country and abroad. Limits...and Beyond! I invite you with great pleasure to the International Week of New Music Festival 2016, the 26th edition!