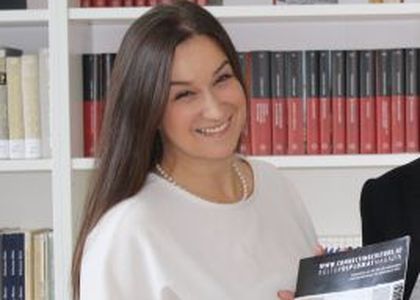 Talking to the conducter Vladimir Jurowski at Musikverein in Vienna - An interview with Irina Cornișteanu, the manager of the Romanian Cultural Institute in Vienna

Tuesday, 24 May 2016 , ora 11.06
Sunday, on the 22nd of May 2016, the Romanian Cultural Institute in Vienna presents the conducter Vladimir Jurowski with Ursula Magnes, the manager of the musical editorial office of Radio Klassik Stephansdom in Vienna. Irina Cornișteanu, the general manager of the institution, gave us more informations about the Sunday event, but also about the future projects of the Romanian Cultural Institute in Vienna.

This afternoon, the Romanian Cultural Institute in Vienna invites us to Musikverein, to watch a dialogue centered on Vladimir Jurowski, the artistic manager of the "George Enescu" Festival since 2017. How it all started?

The initiative was Vladimir Jurowski's, in Vienna, because in May and June he will have many concerts at Konzerthaus and Musikverein, and also our partners' from Artexim, the organizer of the international festival "George Enescu", those who made this event possible with us together. Jurowski's programme is full and of course we had to schedule it ahead, so that he could stay longer after the concert at Konzerthaus, to present at Musikverein his plans for 2017 (when the next edition of "Enescu" Festival will take place). Also, his presence at this moment is very benefical, that is before the 1st of June when is the deadline for the signups for this year's edition of the National Contest "George Enescu".

Do you plan on continuing the series of these dialogues or this one today would be the only one?

This was an event for 2016 and we would like to continue the series of events in 2017, to promote the festival. We were glad to have Jurowski with us and maybe next time, it will be a musical event. Anyway, it all began in 2014 with the series called "Enescu and Vienna" and it included recitals, dialogues with several figures, guided tours throughout Vienna, where George Enescu once walked as a child, before leaving with his first diploma from Musikverein, where it is in their records. Thanks to the 2015 success when we had this kind of events monthly during "Enescu and Vienna", we would like to continue it in the future, choosing each time a subject, a theme which atracts a large number of people.

What other musical performances are programmed for the Cultural Institute in Vienna in the near future?

Exactly today we were talking about the programme of June when we somehow changed the approach from the classical music repertoire which the audience could listen in one of the Romanian Cultural Institute's rooms in May, having a few recitals, to the jazz domain with an event on the 9th of June at Porgy&Bess, with "Nicolas Simion Group", a group of five that performed internationally. This event will be called "Transylanian Moods" which is also the name of the album by Nicolas Simion, continuing to alternate in June the literary, theatre and musical events.