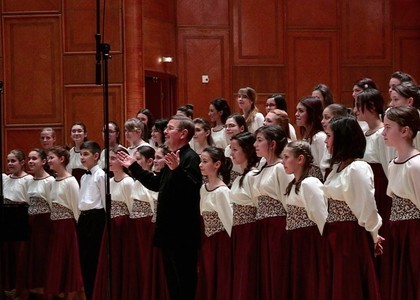 Tuesday, 31 May 2016 , ora 15.16
On Wednesday, the 1st of June 2016, in the studio "Mihail Jora", there will be the concert of the Radio Chamber Orchestra, an event that celebrates the International Children's Day. The conducter will be Sabin Păutza,the one who will also conduct the Radio Children Choir, trained by Voicu Popescu, and the solist will be the violinist Maria Marica. The Wednesday repertoire will include works by the evening's conducter, Sabin Păutza, but also oppuses by Wolfgang Amadeus Mozart, Serghei Prokofiev and Claude Debussy.

Voicu Popescu, the conducter of the Children Choir, has spoken about the repertoire of the little ones and about the ensemble's preparing for this concert which starts at 19:00 and can be listened at our radio or online, at romaniamuzical.ro.

I chose from the works of the composer Sabin Păutza something which represents him for sure, considering that the two works have been written in his youth, and I must mention that last year, we've also had the opportunity and joy to play one of his important works, meaning "The moon children's offering", the International Contest in Munich where we've met other nine selected band wordwide. Sabin Păutza has a lot to offer from this point of view; he knew and still knows very well the child's soul and he managed to imagine really good musical scripts. And when I say this, I especially think about the Suite "Canti profani" which we'll be playing on Wednesday, conducted by him, and of course, a song where the harmony knowledges are beyond the regular ones, a song which is addresses mainly to all souls, a song about peace, a beautiful, uplifting song which has been written with an exceptional harmony. The two will complete each other and will compose an attractive programme for the audience, sang joyfully by kids and I'm sure, listened gladly by the national audience and those who are already signed up to broadcast our concert- EBU will broadcast the concert for the Children's day on the radio for the entire Europe.

The children rehearsed on Saturday with maestro Păutza; we agreed upon the last details. Of course that what we are doing is meant to ensure the technical part and the propper interpretation of the sheet. The composer, the conducter always comes with his precise elements of nuance. The children worked in the past with conducters. But is the first time when we work with Sabin Păutza as a conducter and we're very glad to do so because Păutza is, as I was saying earlier, a good connoisseur of the child's soul, he has a ludic infectionate predisposition and I'm sure it will be a show likewise infectionate.

You've already mentioned their reactions towards the repertoire. How did the rehearsals evolve for these two works?

I must admit that the rehearsals were a tour de force, considering that the projects of the Radio Children Choir were of a different kind up until recently and we started rehearsing just two weeks ago, being hard to schedule our time to rehearse only for this repertoire. It's little time for a children choir who needs a good relation and security with the sheet and the work's spirit. So, we've worked pretty hard because it was a short time and especially that in "Canti profani", it is about a pretty evolved musical speech. The polyphonies, the heterophonies, the games, the shoutings, the less expected or less musical sounds, may transform the language into a complex and challenging one and for that you need time and a lot of science.

I invite our audience, of the Radio Children Choir, to come to this concert because you could see here other faces of this ensemble which for sure accustomed his audience with certain types of repertoires. It will be a bit different now and that's why I consider it is worth seeing it this way, too, and the first encounter with the composer and conductor Sabin Păutza will bring a breath of fresh air in our relationship with the bands we usually play with. I think it will be a special evening, especially sensing this solidarity around the event, around the International Children's Day, to sense this solidarity with the European listeners who will be beside us on Wednesday evening.