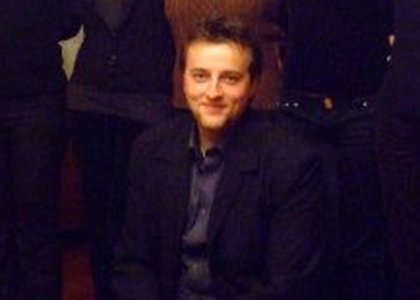 Friday, 17 June 2016 , ora 10.22
Oresteia III - Eumenides by Adrian Stroe, was presented on 16th of June 2016 during the Contemporary Music Festival "Musica Realta", from Milan. Members of Banatul Philharmnic of Timisoara (amongst others, Cristian Ardelean and Cosmina Ivan ), along with Nicolae Haţegan (Radio France Choir) and the French saxophonist Daniel Kientz, performed this part under the baton of conductor Cezar Mihai Verlan, whom we interviewed in the day of the show:

Mister Cezar Verlan, during the Musical Autumn of Cluj, in 2014, the show Oresteia III - Eumenides by Adrian Stroe was presented, under your baton. You re-stage it today, 16th of June 2016 in Milan, at Auditorium di Vittorio. Are there any musical, production or scenography differences between that setting from 2014 and the one from today?

Yes, there are differences because here in Milan, unfortunately, we did not have the space required, therefore we reduced a lot from the staging. From the musical point of view, it remains the same as the performance from Autumn of Cluj.

You present this opera during the Contemporary Music Festival "Musica realta". How was this invitation received?

Oresteia III - Eumenides by Aurel Stroe closes the festival. I received the invitation through the French saxophonist Daniel Kientzy, the one who introduced us. He enjoyed the collaboration from Autumn of Cluj and at Luigi Pestalozza's invitation, director of the Milanese festival, they suggested we did here this performance. This year's "Musica realta" Festival has the theme of musica lontana , that means music from faraway from Italy. There were guests from Iceland and Poland and we are the ones to close the gala.

We are talking about an unusual opera, in which the thick vocal parts meet the singularity of some saxophone types, all of them handled by Daniel Kientzy, for whom Aurel Stroe wrote this part, as a matter a fact. How would you recommend it to an eventual listener?

We are going to sing, here in Italy, in Romanian and greek, as well. That means there are some pieces that have to be sung in Romanian and some others, in ancient greek. In Italy, they asked for the libretto in order to translate it in Italian, so that the audience know what's what. Of course, during Autumn of Cluj, we had a very well adjusted staging and also the required room and that is why the performance was within the audience's reach. From a musical point of view, we face a lot of challenges while performing the Eumenides- it is quite an atypical language, in comparison to what we are accostumed to. And, of course, Daniel Kientzy excels in playing all the saxophones.

Will there be other performances?

Yes. On 5th of October at Bacău, during a festival.