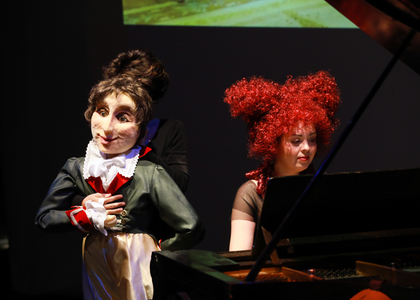 A couple of days ago, the most recent premiere, The Barber of Seville and Rossini's William Tell took place on the same stage. The success was huge and now we have eight more titles - The Childhood and Tells of Bach, Beethoven, Mozart, Chopin, Enescu, Vivaldi, Wagner and now, Rossini's William Tell. In a couple of days, on Sunday, 16th October, Classic is Fantastic: How to Comprehend Music's season will start. Sunday, at 11:00, on the Romanian Athenaeum's Big Hall stage, 'Petru Ghenghea' Engineers Orchestra, conducted by Andrei Iliescu will start the season, as usual. This time they will open a very interesting programme, dedicated especially to the percussion instruments. Actually, maestro Iliescu intends to present three works through which he can show that the percussion instruments should not stand only in the last rows of the orchestra, but they have a lot to prove, even when they are in the spotlight, as soloists. And he will prove this with the help of John Beck's Concerto for Timpani and Percussion Ensemble, David Rimelis's Pictures of Emily and Shchedrin's Bizet, fragments from Carmen Suite, as brilliant and filled with force and spirit, as is Bizet's Carmen. As you already know, we have a new work every month. I did not say concert, because when it is not about a symphonic orchestra, I double the performances - I schedule one at 10 and 12:30 and every time the halls are full. In November, Cornel Trăilescu's Puss in Boots will be performed, and by the end of the season, Frederick Loewe's musical My Fair Lady will be performed. Both concerts will be held with the help of the National University of Music Bucharest.

We are glad to announce the beginning of a new lesson of jazz, held by Irina Sârbu and by her band colleagues; a concert which already enjoys a great audience and success - Let's Sing Jazz Songs to Santa. We usually switch between these music lessons: On Your Birthday, Mother! in March and when it's necessary, in December, Let's Sing Jazz Songs to Santa on the 4th December.

It rarely happens for me to resume work, but this time I will rerun Igor Stravinsky's The Soldier's Tale, a rendition by the instrumentalists in Mozaic Trio (Oana Spânu-Vişenescu - violin, Ilie Vişenescu - clarinet, Diana Spânu-Dănilă - piano) and actors Anca Sigartău, Mihai Bisericanu and Sandu Mihai Gruia. It is a show that must be rerun, because not very often one has the opportunity to listen to and see a well-performed The Soldier's Tale. The same way, The Boy Who Cried Wolf is not seen too often; we ended our former season with The Boy Who Cried Wolf and we will reschedule it. But all in good time.

I have received a gift from the "Tinerimea română" National Art Center - and I really want to thank this art center - a concert-lesson performed by 'Preludiu' Chamber Choir, conducted by Voicu Enăchescu. We have not had a choir in Classic is Fantastic: How to Comprehend Music, so I am looking forward to this morning. Of course, there will be two concerts - one at 10 and another at 12:30. This is how Classic is Fantastic: How to Comprehend Music's season looks like. I want to say again that we start Sunday, on 16th October, at 11:00 with 'Petru Ghenghea' Engineers Orchestra, conducted by Andrei Iliescu.