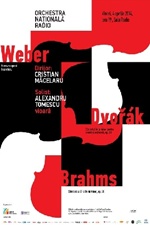 Monday, 31 March 2014 , ora 8.52
Friday, on 4th April, 19:00, at the Radio Hall, two valuable Romanian artists will meet - the conductor Cristian Măcelaru, an associate conductor of the Philadelphia Symphony Orchestra and the violinist Alexandru Tomescu, soloist of the Romanian Radio Orchestras and Choirs and the one who has won the right to play the Stradivarius Elder-Voicu violin.

The event, sponsored by the Romanian National Radio Orchestra, will put together three musical scores which you will enjoy whether you are a regular attendant of the concert halls or just an amateur! The evening will begin with the overture of the opera Freischütz by Carl Maria von Weber, the first important romantic opera composed on German land and inspired by the German folklore tales about an elite sharp shooter who makes a pact with the devil. It will be followed by the Concert in A minor for violin and orchestra by Antonín Dvořák, who wrote it with the purpose of dedicating it to one of the greatest violinists of the 19th century, Joseph Joachim, but who never managed to play it. The evening repertoire will end with the Symphony No. 4 in E minor, the last musical score of this kind composed by Johannes Brahms.

Interested in the development and support of young musicians, Cristian Măcelaru created the Crisalis Music project. He is currently working with the Montréal Métropolitain Orchestra, the symphony orchestras in Washington, Seattle, Toronto and Baltimore. In September 2013, he had a successful first performance with the Göteborg Symphony Orchestra in Sweden.

Alexandru Tomescu has performed countless times alongside the Radio Chamber Orchestra, as well as the Romanian National Radio Orchestra, on the Radio Hall stage, but also abroad, on tours in Europe and Asia. Many other concerts composed by Mozart, Bruch or Mendelssohn, performed by Alexandru Tomescu with the two ensembles were recorded and released by the Editura Casa Radio.

The Stradivarius tour, created around the vintage violin on which he plays, is a yearly event which carried the young violinist countless times all over the country. He performed the three great unabridged repertoires for the solo violin - the 24 Caprices by Niccolo Paganini, the six Sonatas by Eugène Ysaÿe and the six Sonatas and Partitas by Johann Sebastian Bach, the tours having received their own DVD and CD release and discography articles which were very successful.

Passionate about chamber music as well, Alexandru Tomescu performed for the first time in the Romanian Piano Trio (2005-2010) and since 2011 he has been the first violin of the Ad Libitum Quartet, a prestigious chamber music ensemble with a history of over 25 years of activity.

The Radio Hall can be reached by using the public transportation, such as, the tram routes no. 24 and 44 to the Radio Romania headquarters - Piaţa Virgiliu bus stop (Berzei Street at the road junction with Ştirbei Vodă, close to Berthelot Street). You could also use the transportation nearby Mircea Vulcănescu Street, Berzei Street, Ştirbei Vodă Street, Eroilor Boulevard, Calea Plevnei and Dinicu Golescu Boulevard - buses 133, 178, 126, 168, 226, 368, etc.