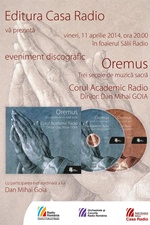 The Artistic Climax at Radio Romania Music: the Oremus album, with the Conductor Mihai Goia and the Radio Academic Choir

Thursday, 3 April 2014 , ora 8.49
Close to the Easter Holiday, Radio Romania and the Casa Radio Publishing House are glad to invite you to the release of Oremus, Three Centuries of Holy Music, the most recent album of the Radio Academic Choir.

On Friday, 11th April, in the central foyer of the Radio Hall, during the interval of the Season's concert (the Mass in B minor Concert, of J.S. Bach) Dan Mihai Goia, the conductor of the Radio Academic Choir, will talk to the public about this album. Below, we present you some of his thoughts:

''This double album entitled Oremus, Three Centuries of Holy Music, represents an artistic climax. Oremus means to pray, to believe in high quality music, to heal our positive thoughts, full of hopes, towards God and to become better human beings. The music is said to have holy origins and if God gave it to us as a gift, then we must understand it with our mind, we must play it with our souls and we must share it with the public''.

The Oremus, Three Centuries of Holy Music album, released by the Casa Radio Publishing House in the Performative Profile collection, includes recordings made by the Radio Romania during 2009-2012, acapella works and creations accompanied by instruments such as the piano, the pipe organ and the flute, gathered from both the universal and the Romanian repertoire.

PhD. Professor Grigore Constantinescu, in presenting this album, states: ''there is no uplift of the thought towards the purity world without praying; there is no pray without word and engagement and there is no song without the artistic existence, embodied in the voice. Since ancient times, the healing of the thoughts towards God was often realized through the voices of the human beings, which were able to unify the sensibility with the sound, in a priceless interfusion''.

The Radio Academic Choir has offered this type of worship towards Pater noster, Unser Vater, O, Padre Nostro, Otche nash, Notre Père, Our Father, or towards Virgin Mary. We listened to them, wishing to have them at home, to experience again the plenary feeling we had during the concert, sanctified through the song, in the solitary mystery of the calm and intimacy.

Known as one of the finest Romanian ensembles, the Radio Academic Choir has developed during time, under the baton of some important conductors, such as Sergiu Comissiona, James Levine, Mendi Rodan, Horia Andreescu, Cristian Mandeal, Enrique García Asensio. Its participation in the 'George Enescu' International Festival brought about collaborations with conductors such as Valery Gergiev, Vladimir Jurowski and Zubin Mehta.

The Oremus, Three Centuries of Holy Music album is available in the Casa Radio Publishing House Bookshop, on 31st, Temișana Street, or online at www.edituracasaradio.ro website, at the price of 19 lei. Also, it may be purchased from the distribution partners, including the bookshops from Bucharest and around the country.