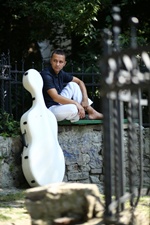 Thursday, 24 April 2014 , ora 10.27
The cellist RĂZVAN SUMA, one of the most active young Romanian musicians, won over the audience in several towns of Romania with his national tours 'Do you like BACH?' and 'Do you like BRAHMS?'; he is appreciated as soloist in the Radio Hall concerts and participates in projects that combine different musical genres, aimed at an audience eager for innovation: for example, the collaboration with Viţa de Vie or the concerts together with Analia Selis. Moreover, he gave hundreds of recitals and concerts abroad; beside the Spanish pianist Josu Okiñena, he performed in halls such as Auditorio Nacional de Madrid, Teatro Colon in Buenos Aires, The Cultural Centre of Belem in Lisbon, Kursall in San Sebastian or Casa da Musica in Porto.

On Wednesday, 30th April, at 19:00, you'll be able to listen to Răzvan Suma, beside the Radio Chamber Orchestra, under the baton of British conductor WILLIAM KUNHARDT. Principal conductor of the Arensky Chamber Orchestra in London and associate conductor of the Piraeus Festival in Athens, William Kunhardt enjoys an active career in the British capital, but he was also applauded in Athens, Berlin, Cairo etc.

Răzvan Suma will interpret The Concerto for Cello and Orchestra in C Major by HAYDN, a genius of perfect musical shapes. The cello played by Răzvan Suma was created by Charles Adolphe Maucotel, one of the most appreciated instrument makers of his time, in Paris, in 1849.

The concert at the Radio Hall will be supplemented by an original photo exhibition with Răzvan Suma as the protagonist. Under the title "Four Seasons with Răzvan Suma in Cişmigiu", the photographers Adi Stoicoviciu and Cristian Preda took pictures of the Romanian artist and his cello in several spaces of the Bucharest park - a real photo marathon across the four seasons. The almost 100 images, printed on canvas - as the prayers on threads, left to the wind, in Asia - will be exhibited at the Radio Hall, in front of the building, on the day of the concert.

The programme of the concert at the Radio Hall will include a beautiful work by Mozart - Symphony No. 35 in D Major (the Haffner Symphony). Its name comes from a noble family in Salzburg who commissioned the work. You will also listen to a creation of the American composer Aaron Copland - Quiet City and one of the French musician Francis Poulenc - Sinfonietta.
The tickets are available on www.bilete.ro, at the Post Offices, in the Inmedio stores signposted Bilete.ro, in the Germanos stores and at the ticket box office of the Radio Hall.