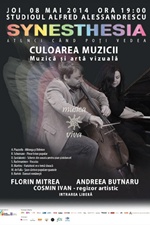 Two Recitals at the Radio Hall and in the Alfred Alessandrescu Studio, a Space Dedicated to the Events Combining Music and Visual Arts

May starts with two recitals, which will take place at the Radio Hall. On Wednesday, 7th May (at 19:00), we invite you to a musical mosaic, with creations by famous composers, such as Paganini, J.S. Bach and Astor Piazzolla, the father of the tango; these creations will be included in the recital performed by the violinist Cristina Anghelescu, soloist of the Radio Choir and Orchestra, together with Cătălin Ștefănescu (guitar) and Marian Ioan Olaru (flute), member of the Radio Chamber Orchestra.

Cristina Anghelescu has played on all Romanian stages, since she was a student; she was invited to perform in famous halls, such as Schauspielhaus in Berlin, Tchaikovsky Hall – Moscow, Teatro Monumental y Auditorium – Madrid,  Smetana Hall – Prague, St. John’s Smith Square – London, or Finlandia Hall – Helsinki. She made numberless tours in all European countries, in Taiwan, in South and North America, in South Africa, etc.

Cristina Anghelescu recorded several albums with famous scores, such as the concerts byMozart, Tchaikovsky, Mendelssohn-Bartholdy, Vivaldi′ s Seasons, and the two famous violin concerts composed by Georges Lioyd, together with the Philarmonia Orchestra of London.

On Thursday, 8th May (at 19:00), this time in the Alfred Alessandrescu Studio of the Radio Hall, you are invited to a special meeting with classical music: Synesthesia, the Colour of Music is the title of the project in which the Musica Viva ensemble - the pianist Andreea Butnaru and the cellist Florin Mitrea (member of the National Radio Orchestra) - gathered the scores signed by Schumann, Bartók, Piazzolla, etc. into a chamber music recital, combined with video projections. The intimate space offered by the Alfred Alessandrescu Studio (located in the Radio Romania building) is ideal for such chamber music recitals, proposing an intimacy between the artists and the public; it represents a place where music and visual projections are successfully combined, in order to offer to the public a complex artistic event.

The visual dimension of the event is signed by Cosmin Ivan; through innovative video projections, he will reveal the music′s ability to transform itself in various and spectacular ways. The event that will take place on 8th May offers free entry, upon availability.

Founded in 2005, under the artistic conduct of the pianist Andreea Butnaru and the cellist Florin Mitrea, the Musica Viva ensemble aims to attract a large number of people into the concerts halls, by means of a special approach of the classical music. Since its foundation, eight years ago, the passion for the chamber music has given birth to several successful projects performed both in the country and abroad. Among them we can name the Brahmsiana 2008 - chamber music with clarinet, the Haydn Inedit (2009), the syncretic performance Sound, Matter, Word (2010), Beethoven - The Integral Piano Trios Project (2011-2012) and the Musical Dialogues (2013) - a series of performances, concerts and professional courses realized in collaboration with the Calea Victoriei Foundation and with the National Music University of Bucharest.

Tickets are available on the website: www.bilete.ro, at the Romanian Post Offices, in the Inmedio Shops, signaled with Bilete.ro, Germanos shops, and at the ticket box office of the Radio Hall.

In order to arrive at the Radio Hall by using the public transport you may take the buses, numbers 24 and 44, up to the ″Radio Romania″ headquarters - Piaţa Virgiliu bus-station (the intersection of Berzei Str. and B-dul Știrbei Vodă, near the Berthelot Str.) You can also choose the public transport that is available in the area - Mircea Vulcănescu Str., Berzei Str. Știrbei Vodă Street, B-dul Eroilor, Calea Plevnei, B-dul Dinicu Golescu - bus numbers: 133, 178, 126, 168, 226, 368.