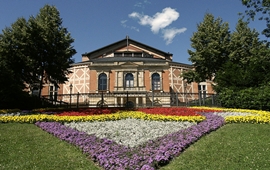 In between 26th July - 1st August Radio Romania Music broadcasts live the six performances interpreted during the Richard Wagner Festival in Bayreuth, one of the most important opera festivals in the world and a reference point for all lovers of Wagner's music.

The series of live broadcasts begins with the Flying Dutchman on 26th July, conducted by Christian Thielemann, one of the baton masters, who has conducted this festival's orchestra annually.

The following Wagnerian evenings include the tetralogy: the Ring of the Nibelung, with Kirill Petrenko - the current General Music Director of the Bavarian State Opera in Munich - at the conductors' stand exactly as last year and the performance of the opera Lohengrin, conducted by Andris Nelsons.

The Bayreuth Festival was established in 1876, by Richard Wagner himself and it is held in the "Festspielhaus" building designed by the composer himself in order to stage his musical dramas. After Wagner's death, the festival has been organized and led by Richard Wagner's direct descendants and it is one of the most important events in both German and international music.

The performances, whose live broadcasts you will listen to on Radio Romania Music between 26th July and 1st August, due to the collaboration with the European Broadcasting Union are: