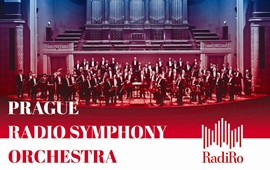 The third and fourth day of the RadiRo Festival bring to Bucharest, one of the oldest and most prestigious radio symphonic ensembles in Europe: the Prague Radio Symphony Orchestra! With a history dating back to the beginnings of broadcasting in the Czech Republic, the Prague Radio Orchestra, which was founded in 1926, will perform at the Romanian Radio Hall on Monday, 22nd September and on Tuesday, 23rd September, in a high quality classical music marathon!

The special participation of the radio orchestra from Prague in this year's edition gives us the unique opportunity to see on stage two reputed musicians of the Romanian Radio Orchestras and Choirs together with two musicians of great value of the Prague orchestra: conductor Tiberiu Soare and pianist Jan Simon, on 22nd September, and conductor Ondrej Lénard and pianist Horia Mihail, on 23rd September. An artistic dialogue of great fineness on Mahler, Dvořák and Strauss, accompanied by a high class international orchestra!

Tiberiu Soare, first conductor of the National Radio Orchestra, is the leader of the young generation of Romanian conductors and is well appreciated both by the public and specialists for the elegance and flexibility of his musical view shown in concerts and opera performances in Romania and abroad.

Also connected to the world of radio orchestras, pianist Jan Simon has a special profile in the symphonic ensemble of the Czech broadcasting stations, where he is both a well-appreciated soloist and art director of the orchestra.

Together with Jan Simon, conductor Ondrej Lénard will come to Bucharest; he has been the conductor of the Prague Radio Symphony Orchestra since 2011 and is acknowledged in the Czech Republic for the professionalism, originality and spontaneity of his musical performances.

On Tuesday, 23rd September, pianist Horia Mihail, who is a concert soloist of the Romanian Radio Orchestras and Choirs, will go up on stage, together with conductor Ondrej Lénard. Having performed in over 1.000 concerts all over the world, Horia Mihail is today one of the best rated Romanian pianists and has been, in the last years, the protagonist of four consecutive editions of the Travelling Piano tour, organized by Radio Romania Music, which have attracted both the Romanian and international audience.

The second edition of the RadiRo Festival, organized by Radio Romania Music, will take place during 20th - 27th September and will bring to Bucharest, for the first time, five European radio orchestras, successful soloists and conductors from Europe and the USA. The honorary director of the Festival is conductor Cristian Mandeal.

Tickets are available on www.bilete.ro, the Romanian Post Offices, the Inmedio Stores signaled as "Bilete.ro", the Germanos Stores