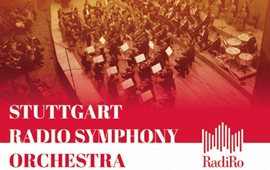 The RadiRo Festival will continue on Wednesday, 24th September, and on Thursday, 25th September, at the Romanian Radio Hall, with two consecutive concerts of the Stuttgart Radio Symphony Orchestra, which is coming to Bucharest accompanied by its first conductor, Stéphane Denève! Mezzo-soprano Ruxandra Donose will be the protagonist of the German orchestra’s first evening of the RadiRo Festival, on 24th September, in a dense and dynamic programme of Ravel & Strauss! The second concert of the Stuttgart radio symphonic ensemble, on 25th September, presents, as violonist, the Israeli-born musician Nikolaj Znaider, one of the most important names of the international music scene!

An “orchestra of freedom”, founded by the government of the American armed forces in 1945, right after the war, the Stuttgart symphonic ensemble of German broadcasting is famous in Europe for the exceptional musical sonority of its concerts, which is known as the Stuttgart Sound. It became a prestigious orchestra in Germany under the baton of Sergiu Celibidache, in the 70’s, and today it gives concerts and takes part in festivals with a programme that combines contemporary music and a classical repertoire.

During the first concert of the Stuttgart Radio Orchestra, on 24th September, mezzo-soprano Ruxandra Donose will go up on stage together with Stéphane Denève; she is well appreciated by the Bucharest audience at the Radio Hall where, in the last few years, she has been one of the Three Divas. With a vocal timbre of such coloratura and sensibility that render unicity to her performances, Ruxandra Donose gives concerts and opera performances in important music venues in Europe and the USA. In 2014, the mezzo-soprano received the Editor's Choice award given by Gramophone Magazine for the DVD recording of Tamerlano, by Händel, together with Il Pomo d'Oro ensemble.

The concert on 25th September presents as soloist, for the first time at the Romanian Radio Hall, violinist Nikolaj Znaider, one of the most open and flexible young musicians who is at the same time a violinist, a conductor and a chamber music performer. He was invited by Valery Gergiev, as first conductor of the Mariinsky Theatre Orchestra in Sankt Petersburg; he conducts symphonic concerts and opera performances and, as a violinist, he collaborates with world’s great orchestras. He recorded concerts under the baton of conductors, such as, Daniel Barenboim, Zubin Mehta, Valery Gergiev and Mariss Jansons.

The second edition of the RadiRo Festival, organized by Radio Romania Music, will take place during 20th – 27th September and will bring for the first time, to Bucharest, five European radio orchestras, successful soloists and conductors from Europe and the USA. The honorary director of the Festival is conductor Cristian Mandeal. The 2014 edition of the RadiRo Festival is dedicated to the German composer Richard Strauss, whose 150th anniversary was celebrated recently.

Tickets are available on www.bilete.ro, the Romanian Post Offices, the Inmedio Stores signaled as “Bilete.ro”, the Germanos Stores and at the Radio Hall Box Office.